(Better with a laugh track – Promoted by Colorado Pols) 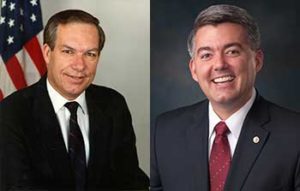 Colorado Republican Wayne Allard, who served in the U.S. Senate during the 1999 impeachment trial of President Bill Clinton, says Sen. Cory Gardner, a fellow Republican, is doing the “right thing” by holding off on his impeachment decision.

Gardner can “explain why he voted one way or the other” after he casts his vote, said Allard.

Gardner, who once worked for Allard, faces “a lot of misinformation out there,” as he decides how to vote on the impeachment of Trump, and he’ll have to “sift through that,” Allard told the Colorado Times Recorder Friday.

“I think Senator Gardner is doing the right thing to hold off until he’s got the facts in hand, and then he can cast his vote and explain why he voted one way or the other,” said Allard.

Unlike Gardner, who’s been silent on impeachment to the point of avoiding reporters who are chasing him through the halls and elevators of Congress, Allard published an impeachment diary in the Rocky Mountain News at the time. In multiple entries, Allard commented on all facets of the trial.

Denver Post columnist and ProgressNow Colorado director Ian Silverri lauded Allard’s impeachment diary as a “terrific time-capsule of insights into the mind of a Republican Senator deliberating whether to vote to convict a president in real-time.”

Gardner’s critics insist that the Gardner, who’s up for re-election in November, should at least take questions about the impeachment process, including queries about key procedural questions, like whether he wants to hear from former Trump adviser John Bolton.

In Friday’s inerview, Allard recalled listening to the proceedings and deciding that there was “no doubt that Clinton perjured himself.” And this was what “drove” his decision to convict, Allard said, not concerns about obstruction of justice.

“The thing that really drove me to vote for impeachment was the perjury,” said Allard.

“And I think that the obstruction of justice and abuse of power was not a charge that I and a lot of my colleagues took too seriously. I think the thing that drove the Republicans, more than anything else, was the perjury,” said Allard.

“Obstruction of justice is clearly an impeachable offense,” Allard wrote in an impeachment statement in the Congressional Record in 1999. “History and prior practice support this view, and it seems that many members of this body agree that obstruction does warrant removal from office.

“…[T]here are at least four areas of obstruction by the President,” continued Allard’s statement. “These relate to the encouraging of a false affidavit, the concealment of gifts, the assistance in employment, and the attempt to refresh the memory of his Secretary Betty Currie which done a second time several days later is pure and simple trying to influence her testimony. While we may never know with absolute certainty what occurred, the evidence is overwhelming that the President took numerous actions designed to impede the administration of justice.”

Allard is concerned that the impeachment process doesn’t get eroded to the point where somebody is going to go out and dream up a reason to go through an impeachment.

“I’m concerned the [impeachment] process will be part of regular business, which was never intended by the forefathers,” said Allard.

Allard, though, added that he’s still open-minded about the case against Trump, but he’s “looking forward to getting it over with.”

If it’s true that Trump withheld military aid in exchange for investigating the Bidens, Allard said he doesn’t think that’s an impeachable offense, because he believes that Trump should have discretion to withhold funds if he wants.