“I stand with Greta on this issue. (I don’t have a degree in economics either),” actress Louise Linton wrote in a now-deleted Instagram post after Mnuchin chided the 17-year-old’s call for governments to end their support of fossil fuels at the World Economic Forum in Davos, Switzerland, saying she should attend college and study economics…

“We need to drastically reduce our use of fossil fuels,” she wrote. “Keep up the fight @gretathunberg.” 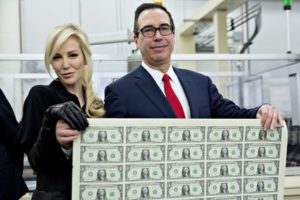 ABC News reporting from Davos Switzerland, where U.S. Treasury Secretary Steven Mnuchin is hard at work setting the Republican Party’s reputation with the kids back to the stone age:

As an executive producer of the last Mad Max movie, U.S. Treasury Secretary Steven Mnuchin might have been interested in the apocalyptic climate warnings of Greta Thunberg.

Instead, he took a personal swipe at the 17-year-old, saying she was in no position to give advice on climate change because she hasn’t been to college yet…

“Is she the chief economist? Who is she? I’m confused,” he said. Then following a brief pause, he said it was “a joke.”

“After she goes and studies economics in college, she can come back and explain that to us,” he concluded.

Climate activist Greta Thunberg, who has been driving white dudes over 5o like Steve Mnuchin to an unusual degree of distraction with her impertinence on the matter of human-caused climate change since coming on the scene in 2018 with a high school protest against climate change that went viral, responded with rightful impertinence:

Which makes sense, since climate science is properly the domain of climate scientists, not economists! In fact this telling mistake helps explain why the will to take action on the issue is nonexistent in the Trump administration. We need scientists informing environmental policy, and instead we have guys like Steve Mnuchin.