What you can do to fight back this week (January 13) 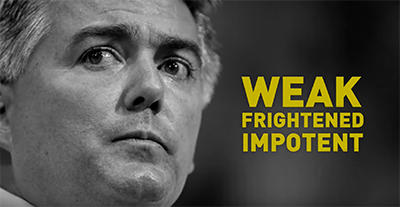 This week in Washington, the articles of impeachment passed by the House of Representatives will be formally handed over to the U.S. Senate. Senators will swear a constitutional oath to “do impartial justice” in deciding the guilt of President Trump, and the third trial in American history to remove a sitting President from office following impeachment will begin.

What happens after that depends on Sen. Cory Gardner of Colorado.

In October of 2016, Sen. Gardner called on Trump to drop out of the presidential race, saying he could not support a candidate to “brags about degrading and assaulting women.” Since Trump’s unexpected victory, Gardner has shamelessly reversed course and become one of Trump’s most steadfast defenders. A majority of Colorado voters support the impeachment and removal of Donald Trump from office, but Gardner refuses to even acknowledge the incontrovertible facts that led to Trump’s impeachment.

After five failed years in office, it’s too late for Cory Gardner to save his political skin. Colorado has rejected Trump at the polls every time they have had the chance to do so, either directly by electing Hillary Clinton in 2016 or by punishing Trump’s party at every level in 2018. All Gardner has the chance to do now is salvage his moral credibility by demanding a fair trial of the allegations against President Trump, and end his political career with more integrity than he has shown up to this moment.

For years, you’ve called and written Sen. Gardner over and over demanding he serve Colorado ahead of Trump. It’s been a frustrating experience as Gardner has time and again refused to honor the wishes of Colorado voters. Gardner needs to hear from you one more time, so it’s crystal clear that his continuing support for Trump will spell the end of Gardner’s U.S. Senate career in November.

Call Sen. Gardner right now at (202) 224-5941 and tell him Colorado demands an impartial trial of the evidence against President Trump, with witnesses and every relevant fact included. This isn’t about Gardner saving his skin anymore; it’s about the judgment of history.

Once that’s done, check out more great ways to make a difference for the week of January 13:

Featured Event: American Resistance: From the Women’s March to the Blue Wave

Join ProgressNow Colorado’s Ian Silverii next Wednesday evening for a conversation with Dana Fisher, author and professor, about her new book American Resistance: From the Women’s March to the Blue Wave. This book traces activists from the streets back to the communities and congressional districts around the country where they live, work, and vote. Using innovative survey data and interviews with key players, Fisher analyzes how Resistance groups have channeled outrage into activism. Beginning with the first Women’s March and following the movement through the 2018 midterms, Fisher demonstrates how the energy and enthusiasm of the Resistance paid off in a wave of Democratic victories.

We are celebrating the beginning of the Colorado 2020 legislative session by having a kick-off party for our puppy mill bill! We will be introducing legislation to ban the retail sales of puppies and kittens in pet stores, to prohibit sham “rescues” from sourcing their puppies from breeders, and to improve standards in large-scale breeding facilities. Our hardworking and dedicated bill sponsor, State Representative Monica Duran, and devoted animal advocate First Gentleman Marlon Reis will also be attending!

We need your help ending the death penalty in Colorado in the 2020 legislative session. For months, activists across Colorado have been writing postcards to legislators asking them to end the death penalty. On January 14th, join us for a pivotal day of action as we converge at the Capitol to deliver the postcards and speak with our representatives to advance civil liberties and end the death penalty. Over breakfast, hear from legislators that champion repeal, receive a lobby training and share why you support an end to this broken system. Then, join us at the capitol to engage in the legislative process, meet with your elected officials and hold legislators accountable.

Planned Parenthood Votes Colorado is excited to get to work during this 2020 legislative session. Come learn about our legislative priorities and mingle with activists, partners, and elected officials. We’re excited to kick off this session and hope you’ll join us as we work towards expanding access to reproductive health care across our state.

Where: Location upon RSVP
When: Tuesday, January 14 at 5:00pm

Join us at the historic Denver Press Club for the lucky 7th Democratic Presidential Debate – and the last one before the Iowa caucuses!

This Vote Common Good Rally is a 90 minute large group event designed to inspire voters in practical ways to make the common good their voting criteria by pursuing faith, hope, & love for a change on election day 2020 and to prevent the re-election of Donald Trump. Together with Together Colorado Action, Our merry band of musicians, poets, speakers, activists, candidates and other common do-gooders invite you to join us.

Hear from candidates opting in for The Fair Elections Fund’s matching funds and from activists and elected officials working on the implementation of Denver’s Fair Elections Act and on new legislation locally in Aurora and statewide for Colorado. Celebrate these significant developments with like-minded folks determined to counter the effects of Citizens United and rid our politics of the corrupting influence of big money.

The 2020 legislative session is right around the corner and there will be several bills that will impact the lives of LGBTQ Coloradans and their families. We’re hosting a happy hour to give you an opportunity to grab a drink or two, meet pro-equality legislators, AND learn about what we’re expecting in 2020!

Denver’s Fourth Annual Womxn’s March and Community Exhibition will take place on Saturday, January 18th 2020. This is more than a March; this is a Movement. To better ignite action and create lasting impact, we will forgo a rally this year. Instead, after you march, make your way to the McNichols Building (attached to Civic Center Park) and connect with almost 60 local non-profits and grassroots organizations that are serving the community.

Where: Civic Center Park, Denver
When: Saturday, January 18 at 9:00am

Thanks as always for everything you do! See you next week.