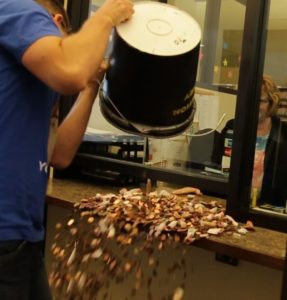 The NRSC making it rain…sort of.

You may have missed this story in The Denver Post last week about the half-assed re-election campaign efforts underway on behalf of Sen. Cory Gardner (R-Yuma), who is widely considered to be the most endangered incumbent Republican Senator in the country in 2020. As Justin Wingerter wrote for the Post just before Thanksgiving, there is a conspicuous lack of resources being expended for Gardner in Colorado:

As special interests and dark-money groups spend millions of dollars to criticize him on several fronts — guns, health care, impeachment, climate — a year before his re-election, U.S. Sen. Cory Gardner’s campaign and Republican allies in Washington have responded with an unusual tactic: near-total silence…

…One year out, the Gardner campaign is content to bide its time and stash its cash for what promises to be a contentious 2020 endeavor.

Wingerter’s angle on the lack of support for Gardner is that it is a strategic decision to lay low at the moment, which may very well be true. But it’s also possible that things are quiet for Gardner because national Republicans aren’t convinced that Gardner’s seat can be saved in 2020. Gardner’s poll numbers are absolutely brutal – Republicans don’t even like him – and early indications are that Coloradans will not be receptive to the re-election pitch from President Trump at the top of the ticket.

On Monday, we got another hint that Gardner’s hide may not be particularly important to national Republican groups. As Marianne Goodland writes for the publication formerly known as the Colorado Statesman, the National Republican Senatorial Committee (NRSC) this week launched a rather anemic paid media effort for Gardner that might literally be worth thousands of dollars:

The campaign, which begins Monday evening, includes a digital ad and a mock travel agency brochure for the “Joyride John Travel Agency,” poking fun at Hickenlooper’s use of private jets for travel, which is at the heart of the ethics complaint currently awaiting action from the state Independent Ethics Commission.

The four-figure digital ad buy will run on Facebook in Denver throughout the week, according to NRSC spokeswoman Joanna Rodriguez. The NRSC declined to identify the specific amount for the ad buy. [Pols emphasis]

A “four-figure” ad buy? The NRSC can’t even wrangle $10k to help Gardner? This is peanuts in a U.S. Senate race, even for a digital ad buy. For comparison’s sake, consider that Rocky Mountain Gun Owners spent $2,150 in May on a radio ad buy for a recall campaign that they never actually commenced.

Perhaps the NRSC played it stingy with its “four-figure” ad buy because it isn’t completely comfortable with the message (see “SIDE NOTE” below), or perhaps it decided that its money was better spent in states like Arizona, Iowa, and Maine. Whatever the reason, spending a couple thousand bucks on a digital ad when Gardner is getting hammered by $4 million in opposition spending shouldn’t make any Colorado Republican feel particularly hopeful about 2020.

SIDE NOTE: Last month we took note of an odd bit of phrasing in a story about an ethics complaint against former Gov. John Hickenlooper, now a candidate for U.S. Senate, that was subsequently picked up by 9News. The complaint was filed long ago by an organization created by former Republican House Speaker Frank McNulty, and it is substantially light on substance — the editorial board of The Denver Post essentially dismissed the merits in early November — which is why groups like the NRSC pitched Wingerter on a different angle just before the Thanksgiving holiday. This new approach was to claim that Hickenlooper’s legal defense is being paid out of “a federal fund meant to help the state after 9/11,” which is a remarkable revision of actual history. As we wrote on November 21:

You haven’t heard of this “post-9/11 recovery fund” because nobody ever called it that. What Wingerter is referring to is the Jobs and Growth Tax Relief Reconciliation Act of 2003, otherwise known as the “Bush Tax Cuts.”

Of course, the 2003 Bush Tax Cuts did pass through Congress “post-9/11.” In that regard, every piece of legislation that has been approved since September 11, 2001 could also be called “post-9/11.” This executive order from Gov. Bill Owens in 2003 — which is linked in the Post story — makes no mention whatsoever of “9/11.” The money allocated in the Bush Tax Cuts went to all sorts of purposes, including immunization programs and charter school construction. Nobody would characterize the 2003 Bush tax cuts as “9/11 relief” because that’s not how they were sold even at the time.

In this case, the Bush Tax Cuts were categorized as a “post-9/11” fund by Republican operatives in hope that it might generate a news clip that could be used in a negative advertisement against Hickenlooper…which is exactly what happened. “Money for Hickenlooper’s attorney is from federal fund meant to help Colorado economy post-9/11” was the headline of the Denver Post story that the NRSC cites prominently in its digital advertising. This isn’t accurate, but once the headline was printed, the NRSC had everything it needed to move ahead with its ad production. Media outlets love to “fact check” political advertisements; they’re less excited to admit when misleading ads are born from misleading news stories in the first place.