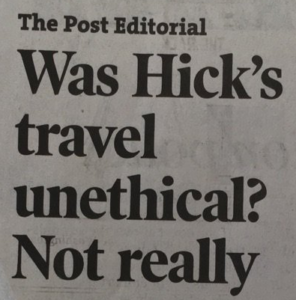 The ethics complaint filed by former GOP House Speaker Frank McNulty against former Gov. John Hickenlooper has been generally discounted by knowledgeable observers looking at what appear to be the innocuous facts of some travel Hickenlooper took as governor–including in large part by Hickenlooper’s primary opponents. Despite this, the process of such a complaint against either a sitting or a former elected official provides political opponents numerous opportunities to pitch negative stories along the way to reporters, sometimes with success and sometimes not.

One of those fairly predictable negative pitches involves the fact that the legal defense for public officials in ethics proceedings in Colorado is paid for by the state. Former Secretary of State Scott Gessler, for example, spent hundreds of thousands of dollars unsuccessfully defending himself against an ethics complaint stemming from his use of discretionary funds for partisan political event travel. In the case of the complaint against Hickenlooper, the Denver Post and 9NEWS both reported yesterday that the public has picked up a little north of $40,000 of the tab for defending Hickenlooper from McNulty.

There’s nothing unusual in reporting on a detail like this, and we’re happy to recount news reports of Gessler’s legal tab for that particular case. But the Denver Post led its story with a bizarre detail that we’ve been puzzling about all day:

John Hickenlooper’s attorney has been paid $43,390 — at a rate of $525 per hour — in taxpayer money to defend him before the Colorado Independent Ethics Commission as part of an arrangement that dates back to the former governor’s time in office.

It’s common for Colorado elected officials to be represented by government lawyers, or by private attorneys enlisted by the government, but in this case, the recipient of the money was hidden and the money came from a federal fund meant to help the state after 9/11. [Pols emphasis]

Wait, what? Post 9/11 economic recovery fund? What in the hell is that?

Here’s what the Post’s Justin Wingerter writes to back up his sensational allegation:

According to the transparency database, money paid by the state to Grueskin comes from the Jobs and Growth Tax Relief Reconciliation Act of 2003, a bundle of federal dollars allocated as part of a President George W. Bush-era plan to jump-start the post-9/11 economy. [Pols emphasis]

You haven’t heard of this “post-9/11 recovery fund” because nobody ever called it that. What Wingerter is referring to is the Jobs and Growth Tax Relief Reconciliation Act of 2003, otherwise known as the “Bush Tax Cuts.”

Of course, the 2003 Bush Tax Cuts did pass through Congress “post-9/11.” In that regard, every piece of legislation that has been approved since September 11, 2001 could also be called “post-9/11.” This executive order from Gov. Bill Owens in 2003 — which is linked in the Post story — makes no mention whatsoever of “9/11.” The money allocated in the Bush Tax Cuts went to all sorts of purposes, including immunization programs and charter school construction. Nobody would characterize the 2003 Bush tax cuts as “9/11 relief” because that’s not how they were sold even at the time.

The group that filed this ethics complaint in the first place, which is run by former State House Speaker Frank McNulty, is trying to re-name decades-old legislation in order to give their flailing argument a boost. Today, two Republican lawmakers are speaking out in an effort to boost this “9/11 relief” nonsense. As Marianne Goodland writes for the publication formerly known as the Colorado Statesman:

Sen. Paul Lundeen, R-Monument, and Rep. Rod Bockenfeld, R-Watkins, sent a letter to chair and vice-chair of the Legislative Audit Committee on Thursday, seeking an investigation into “the inappropriate, perhaps illegal” use of federal dollars for Hickenlooper’s legal bills. Bockenfeld and Lundeen are both members of the audit committee…

…That letter, which was obtained by Colorado Politics, said those federal dollars were intended to “jump start” Colorado’s post-9/11 economy. According to an executive order from then-Gov. Bill Owens, the dollars were to provide “essential government services or to cover the costs of certain unfunded federal mandates.”

Great work, detectives. It would be very odd indeed if the 2003 executive order said something about the money being used to cover Governor Hickenlooper’s legal bills, since Hickenlooper was at that point in time beginning his first term as MAYOR OF DENVER.

There will inevitably be negative stories that present themselves in the process of an ethics complaint. Whether it’s Scott Gessler or John Hickenlooper, nobody enjoys reading about taxpayer dollars spent on legal defense. But taxpayer money is often used for the legal defense of elected officials who were serving in publicly-funded jobs at the time. The real absurdity here is the “9/11 relief funds” angle on the original Post story, which no doubt helped generate clicks to the Post website but has nothing to do with the rest of the story.

If there’s something we’re missing here, the comment section is open.