“Eleven months ago at the launch of our campaign in Oakland I told you all: ‘I am not perfect.’ But I will always speak with decency and moral clarity and treat all people with dignity and respect. I will lead with integrity. I will speak the truth. And that’s what I have tried to do every day of this campaign. So here’s the truth today,” Harris wrote in a note to supporters.

“I’ve taken stock and looked at this from every angle, and over the last few days have come to one of the hardest decisions of my life. My campaign for president simply doesn’t have the financial resources we need to continue .”

Harris, who spent Thanksgiving in Iowa with family, took a deep look at the campaign’s resources over the holiday and decided she did not have a path to the nomination. A Harris campaign aide said the expected impeachment trial in January further complicated the situation.

That @KamalaHarris dropped out while @JohnDelaney and @marwilliamson are still in the race blows my mind. #copolitics 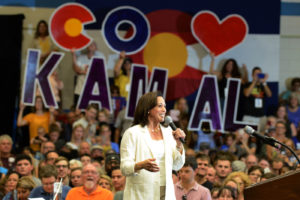 Sen. Kamala Harris is poised to withdraw her candidacy for the Democratic presidential nomination, two sources familiar with the decision tell CNN.

The California Democrat informed her senior staff of the decision Tuesday morning and is planning a public announcement later in the day.

There’s no word yet on an endorsement from Sen. Kamala Harris of any of the frontrunners, but we’ll update when her public statement is released. Harris had momentum early on in the race, but her campaign quickly receded into the background as the three-way battle at the top consolidated and her prosecutorial record as California attorney general came under scrutiny from the left.

And then there was…well, one less. But it remains possible we could see Harris again.