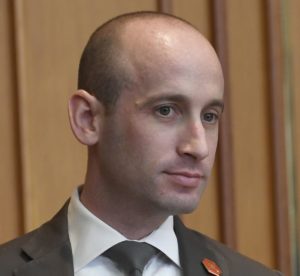 Democrats and civil rights groups have hammered Miller over the past week as the Southern Poverty Law Center (SPLC) publishes summaries of emails the White House aide sent in 2015 and 2016 prior to working in the White House.

The emails, roughly two dozen of which have been reviewed by The Hill, contain links and references to publications associated with white nationalism and show how Miller coordinated with Breitbart News to shape coverage around immigration and the 2016 GOP primary.

From today’s letter, whose signers include Reps. Diana DeGette and Ed Perlmutter of Colorado:

Last week, numerous emails sent by Mr. Miller were made public that clearly establish that he is an avid white nationalist and conspiracy theorist. These emails included material exposing Miller’s support of white supremacist ideology and literature, xenophobic conspiracy theories, as well as his promotion of white supremacist websites. According to the Southern Poverty Law Center’s Hatewatch blog, which obtained the emails, 80 percent of the more than 900 emails directly referenced race or immigration, and none contained “examples of Miller writing sympathetically or even in neutral tones about any person who is non-white or foreign-born.” Given Mr. Miller’s role in shaping immigration policy for your administration, his documented dedication to extremist, anti-immigrant ideology and conspiracy-mongering is disqualifying.

Beyond the disturbing emails that Mr. Miller wrote, is the clear conclusion that he brought his dedication to white nationalism with him into your administration and translated this hateful ideology directly into your administration’s discriminatory immigration policies. Mr. Miller’s documented hatred of Muslim immigrants shaped your Muslim ban, and sheds new light on your administration’s intent in writing that ban. Mr. Miller’s clear support for halting all immigration is evident in many forms, including your continued support for ending DACA as well as the increasing difficulty of obtaining asylum and visas across all categories. There is a clear line between Miller’s advocacy for books like “Camp of the Saints,”–a novel celebrated by neo- Nazis for promoting the view of non-white immigrants as “monsters”–and the Administration’s inhumane family separation policy, of which Miller was the primary architect.

Since the release by the Southern Poverty Law Center (SPLC) of emails documenting Stephen Miller’s predilection for openly racist and xenophobic points of view, including material from the infamous VDARE hate site of which Colorado nativist politico Tom Tancredo is a former board member, calls for Miller’s ouster have spread from usual-suspect Democrats to potentially more influential quarters like the Anti Defamation League. On the other hand, Miller is reportedly a personal favorite of President Donald Trump due to Miller’s unvarnished “toughness,” which has helped Miller hold on to power while the Trump administration in general suffers from chronic “high turnover.”

Whether or not Miller weathers this latest storm, he’s become another living example of the worst fears about a public figure proving accurate. It’s not always the case, but sometimes the villains of the story manage to live up to their villainous billing.