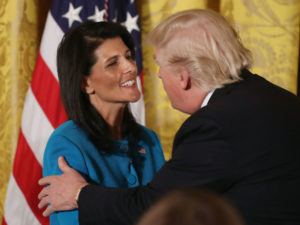 As The Daily Beast reports, former UN Ambassador Nikki Haley recently made it a lot harder for Republicans to continue harping on emails sent by former Secretary of State Hillary Clinton:

North Korea had just tested an intercontinental ballistic missile capable of hitting Alaska, and the Trump administration was scrambling to react. But it seems Nikki Haley, Trump’s ambassador to the United Nations, had lost her password for classified communications.

That’s why on that fraught July 4, 2017, she was typing away on her BlackBerry 10 smartphone, sending “confidential” information over a system meant only for unclassified material.

Haley was in a rush as she headed to her office—“On my way in”—shooting emails back and forth with top aides who’d been with her since she was governor of South Carolina. She needed to make a statement, and they were drafting it for her. “Let’s clean this up,” she writes after looking at some of the copy. “Pretty this up for me,” she says.

The next day we discover what the problem is with her communications. “Can’t find my password for the high side,” she writes.

Haley was apparently sending classified information through an unsecured email system because she forgot her password to the secure account.

Let’s repeat that: Haley used an email system that was not secure because she couldn’t remember her password to the confidential account.

She might as well have just faxed someone a piece of paper with sharpie scribbles across the front.