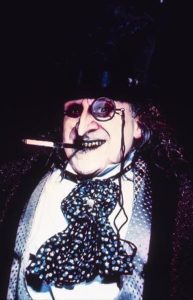 Danny DeVito as The Penguin.

CNN reports, another worst-case scenario outcome for the Trump administration as longtime conservative political nuisance Roger Stone is found guilty of everything the Mueller investigation into Russian interference in the 2016 elections on behalf of Donald Trump accused him of:

Stone, a political provocateur, was found guilty of all seven counts brought by the Justice Department, a victory for special counsel Robert Mueller’s investigation. Stone was found guilty on five counts of lying to Congress, one of witness tampering, and one of obstructing a Congressional committee proceeding.

The verdict marks a stunning conclusion to one of the highest profile prosecutions to emerge from special counsel Robert Mueller’s Russia investigation — a case that began with one of Trump’s most vocal supporters arrested during a pre-dawn raid as the special counsel’s investigation wound down, and that since then has gradually revealed new information about the Trump campaign’s positive reception to foreign interference in the 2016 election.

According to prosecutors, Stone failed to turn over documents to Congress in 2017, showing he had sought to reach WikiLeaks the previous year, and lied about five facts, obscuring his attempt to use intermediaries to get information that could help then-candidate Trump in the election against Hillary Clinton.

Roger Stone’s attempt to contact the Wikileaks organization on behalf of the Trump campaign, who released the hacked emails supplied by Russian intelligence which served to significantly demoralize the Democratic left after the divisive primary between Bernie Sanders and Hillary Clinton just as the 2016 Democratic National Convention was getting underway, is a belated but still important piece of the story of Trump’s original foreign policy sin. Though Republicans have declared the Mueller investigation to be in the rear view and it’s not the focus of the impeachment inquiry proceeding against Trump in the House over Trump’s politically-motivated extortion of Ukraine, it betrays the same willingness to utilize foreign assistance for personal gain.

And we’ll say it: Stone’s comic-book villain look is something no one in politics should be sad to see go out of style, assuming it ever was which is historically questionable.