Republicans Slink to Gutter on First Day of Public Hearings 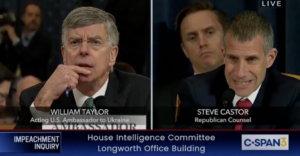 If you read just one summary of Wednesday’s first day of public impeachment hearings on Capitol Hill, make it this piece from Dana Milbank of The Washington Post:

Describing the “irregular channel” Trump lawyer Rudy Giuliani and his team of “amigos” used to coerce Ukraine’s president to announce investigations into Trump’s political opponents, Castor asked Taylor: “In fairness, this irregular channel of diplomacy, it’s not as outlandish as it could be — is that correct?”

Taylor seemed to think Castor was telling a joke. “It’s not as outlandish as it could be,” he said with a laugh. “I agree.”

True! Giuliani could have conducted the entire scheme in drag. Or they could have threatened the Ukrainian president with a Nerf gun instead of merely withholding military aid. But Castor wasn’t kidding. He defended his point at length, then asked again: “It may be irregular, but it’s certainly not outlandish?”

Taylor smiled, shook his head and nodded, as if to convey: Whatever you say.

As the website Law & Crime notes, Wednesday’s performance by Republican attorney Steve Castor was a “trainwreck” worthy of the intense derision it received on social media. As John Harris writes for Politico, the first day of public hearings was a “brutal day for the President.”

And this is only the beginning.