What Does This Even Mean? DougCo GOP Edition

We get forwarded all kinds of bizarre social media postings from both official and decidedly unofficial Republican Party mouthpieces (here’s looking at you, Tom Tancredo) some of which are straightforwardly offensive in any of the customary ways individuals on the fringes of the American political right offend the socially well-adjusted. Others, however, just leave us scratching our heads as to what exactly they’re trying to say at all: 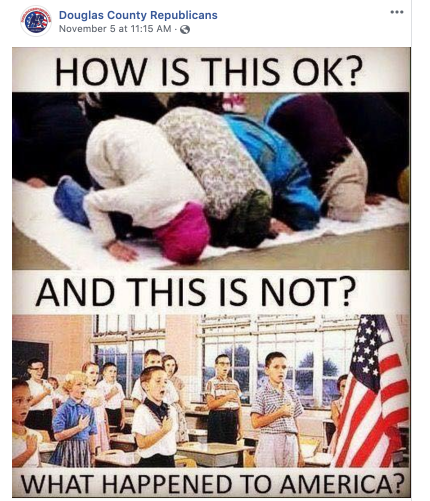 Folks, where are the Douglas County Republicans going with this? In Colorado, it’s the law that students must have the opportunity to recite the Pledge of Allegiance–though they also have the freedom to not recite it. Is somebody forcing kids to pray to Mecca, which would be the only way we can think of this makes any sense?

The problem must be that we expect it to make sense.

But again, this is “official” Republican Party content. You can’t just ignore it.