UPDATE: As they say, a hundred thousand reasons: 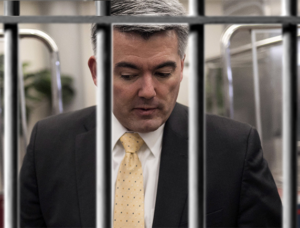 Newsweek reports on the fallout from yesterday’s big story covered in this space, fundraising by President Donald Trump on behalf of vulnerable Republican incumbent Senators including Sen. Cory Gardner of Colorado ahead of their likely service as jurors in an impeachment trial against the President–a situation that gives rise to pretty straightforward corruption allegations:

Attorney Richard Painter, who served as the chief White House ethics lawyer in the George W. Bush administration, warned on Thursday that President Donald Trump appeared to be committing “felony bribery” by giving Republican senators fundraising cash ahead of an increasingly likely impeachment trial in the Senate.

The lawyer shared an article published by Politico on Thursday morning. Titled “Trump lures GOP senators on impeachment with cold cash,” the article outlined how the president is turning to his large network of donors to raise funds for a few senators facing difficult re-election campaigns in 2020. All of those senators have also signed a resolution condemning the Democratic-led impeachment inquiry…

“The senators can raise their own campaign cash. Any senator who accepts cash from @realDonaldTrump before the impeachment trial is guilty of accepting a bribe and should go to the slammer,” he tweeted. [Pols emphasis]

Folks, he’s talking about Cory Gardner–and not just with this latest fundraising appeal, but Gardner co-headlining the Trump campaign’s fall fundraising “retreat” and joining President Trump personally for a joint National Republican Senatorial Committee (NRSC) fundraiser later this month. It’s a fair question that really only applies at a high-drama moment like impeachment, when the Senate has the power to remove a President: at what point does Gardner’s acceptance of Trump’s largesse stop being party loyalty and become something closer to bribery?

There’s the legal question, then there’s the optics. For the purposes of Gardner’s political survival, neither seem helpful.