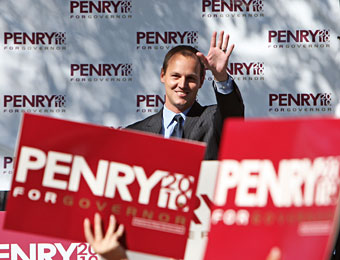 Read between the lines of today’s report from the Grand Junction Sentinel’s Charles Ashby–we don’t think you’ll have trouble seeing what we mean.

“Scott has been a friend, a boss and a competitor,” Penry wrote in an e-mail to The Daily Sentinel. “He’s done a lot for the state, but he’s committed a very serious error that’s significantly weakened his candidacy. And let’s call an ace an ace: Dan Maes’ misuse of his campaign funds was probably an even worse offense.”

“When people ask me what Scott should do, what Dan’s going to do, or what I’m going to do, here’s my answer: Conservatives need to win the governor’s race,” he wrote. [Pols emphasis] “How we accomplish that objective at this point is more than a little unclear. The best thing to do now is to let the dust settle.”

Think back at how the last year must look through the eyes of once-and-possibly-future gubernatorial candidate Josh Penry. Almost exactly one year ago, Penry rolled out an energetic campaign that had every sign of being more than a match for his former boss Scott McInnis. By the time Penry announced last July, McInnis had already shown an ominous propensity for gaffes, and flashes of what would later emerge as a serious personal credibility issue dealing with a naturally inquisitive press.

Penry took a look at his former boss’ early struggles on the trail, and we have no doubt it was an easy choice to enter the race. We would have thought the same thing: I can beat this guy.

But it wasn’t to be: Penry battled against the same GOP ‘establishment’ kingmakers who McInnis had bemoaned after he was forced out of the U.S. Senate primary against Bob Schaffer in 2008. In November, despite–or because of–the fact that Penry was favored by the base and outmessaging his old boss at every step, the plug was suddenly pulled on Penry’s campaign: a move attributed to powerful friends of McInnis such as Phil Anschutz.

Well, we haven’t heard any comment this past week from those Republican kingpins considered responsible for forcing Penry out of the gubernatorial race in favor of Scott McInnis, but we’re willing to assert with some confidence that they feel pretty stupid right now.

We can’t say with certainty what’s going to happen with McInnis’ imploding candidacy, or assess the as-yet unknown legal or electoral strategy (or both) Colorado Republicans hope to employ to extricate themselves from what otherwise looks to be a total disaster. But it’s pretty clear from the story above that Penry is positioning himself as the most viable alternative candidate–should any alternatives turn out to be workable. And after everything the GOP rank-and-file has been through in this long race, he just might be right about that.

He’s got signs ready to go, too.