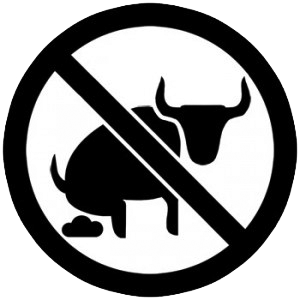 The last 24 hours have witnessed a remarkable turn of events that has played out mostly on social media, and resulted in considerable embarrassment for local Republicans and the fossil fuel energy industry PR people who they work closely with. The long battle this year over Senate Bill 19-181, landmark legislation reforming the mission of the Colorado Oil and Gas Conservation Commission that passed this year, has been a story of hyperbole and engineered backlash slowly giving way to the reality of a law that, while reforming regulatory oversight of oil and gas drilling to prioritize public safety over “fostering” more oil and gas drilling, does not represent anything like the disaster for the industry Republicans and industry flacks like the Colorado Oil and Gas Association warned it would be.

Closing the gap between propaganda and reality over SB-181 was part of the reason why the spate of recall attempts mounted by the Colorado GOP in 2019 against various state legislators and Gov. Jared Polis fizzled–in marked contrast to the infamous 2013 recalls over gun safety legislation. As energy companies assured their investors that they were still able to operate under the new regulations and the swift destruction of the industry in Colorado failed to materialize, the outrage evaporated–and unlike the social wedge issues that have kept the far right frothing at the mouth, it’s the energy industry that has the money to actually retaliate if they wished to. And they don’t.

But despite all the news in recent weeks about the energy industry’s success adapting and prospering in the new regulatory environment of SB-181, energy services giant Halliburton announced this week the layoff of 650 employees in four states, including 178 in Grand Junction. The Grand Junction Sentinel’s Dennis Webb:

Company spokesperson Emily Mir said in an email Tuesday that the company “made reductions to its employee workforce in Grand Junction due to local market conditions. Making this decision was not easy, nor taken lightly, but unfortunately it was necessary as we work to align our operations to reduced customer activity.”

She said that across Halliburton’s Rockies region, which includes Colorado, Wyoming, New Mexico and North Dakota, about 650 employees were affected…

In July, the Houston Chronicle reported that Halliburton cut 8% of its North American workforce as it took fleets of hydraulic fracturing equipment out of the field due to a continued slump in demand for frack services due to low oil prices.

The extremely close relationship between the Colorado GOP and the oil and gas industry means that they regularly coordinate to achieve common goals. Sure enough, Colorado Republicans and energy PR flacks leapt on this story with a ferocity and quickness that strongly suggests they were coordinated. And of course, the acrimony was laid entirely at the feet of Gov. Polis and SB-181: 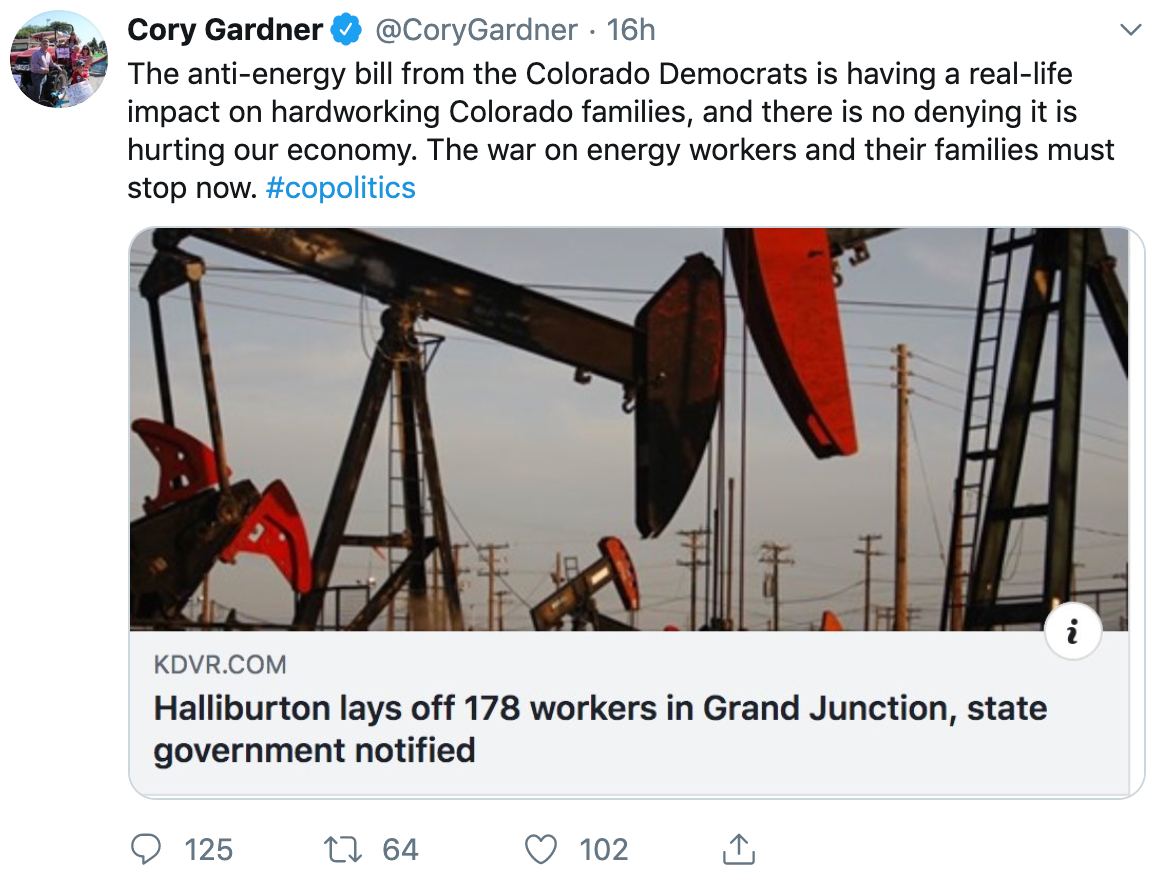 The hard push from local Republicans and their comms operatives to hype this story against the prevailing narrative on SB-181 shows how desperate they are to inflict political damage on Democrats ahead of the 2020 elections. 2019 is coming to a close for the Colorado GOP as a “lost year” of further weakness after their devastating losses in 2018, and they’re scrambling for any political leverage they can find in the wreckage.

But a funny thing happened after yesterday’s coordinated message offensive against SB-181: notwithstanding FOX 31’s Joe St. George who got duped again, local reporters pushed back just as hard on the GOP’s spin. 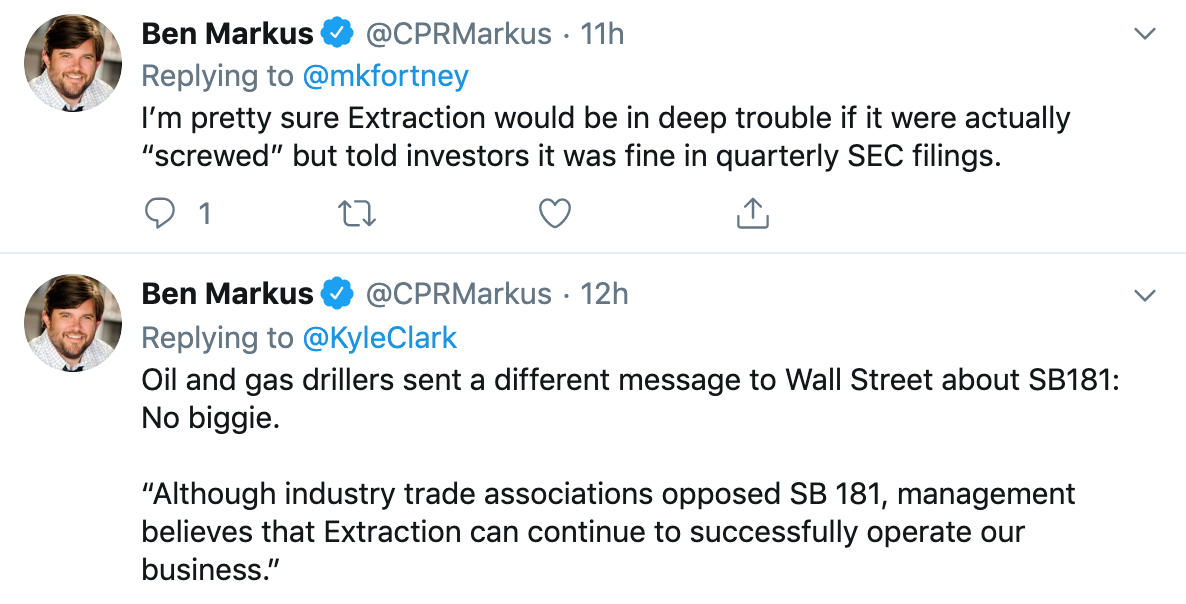 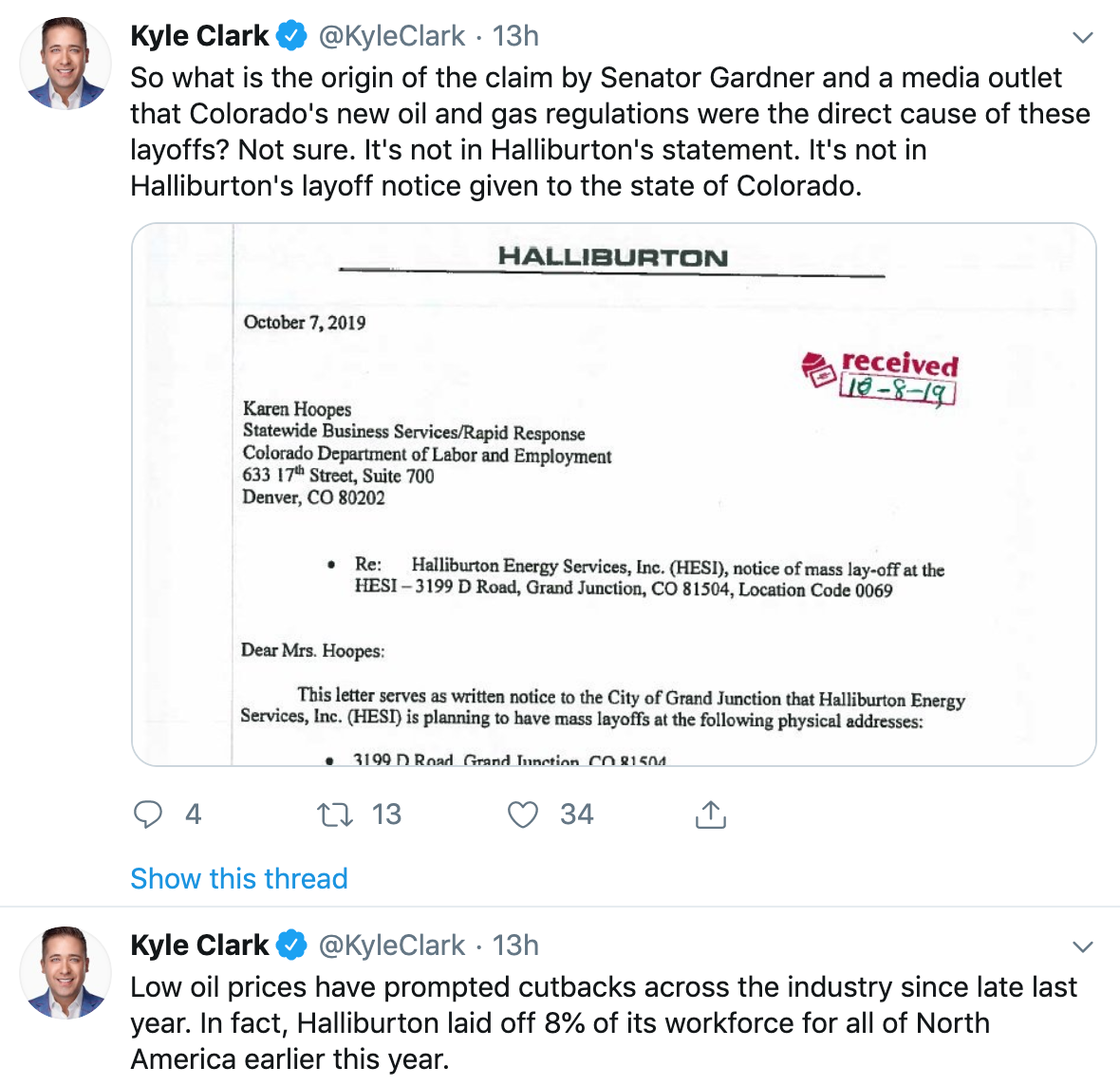 In reality, not even the news stories cited by Republicans back up their insistence that SB-181 is the cause of Halliburton’s latest round of layoffs. The company laid off 650 workers in four states at once, which means less than a third of the layoffs were in Colorado. It’s ridiculous to suggest that regulations in Colorado are to blame for layoffs in New Mexico, Wyoming, and especially North Dakota. And yet here we are.

But more importantly, and just like Gov. Jared Polis told the audience at the COGA annual meeting this year to howls of rage and denial, the largest overriding factor determining the health of the oil and gas industry in Colorado is the global energy market. As Kyle Clark correctly states above, persistent low oil prices since a major crash at the end of 2018 are the reason for energy industry layoffs literally across the globe, including energy-producing regions across America. Regulation in Colorado has no measurable effect on the global price of energy, and all it takes is a moment to think this through before the entire factual basis of their argument falls apart.

Seeing the local GOP message machine jump into action to hype this misleading story was not a surprise. But witnessing their fake news, or at least this bogus spin on the news, deconstructed in real time is a hopeful sign for the coming election season.