If these half dozen protesters want to “stop the madness,” we suggest they go inside and have some hot chocolate.

Trump Victory, along with Colorado Republican Party leaders, is hosting a “counter-impeachment” press conference today called, “Stop the Madness!” The event is one of many such events across the country, coordinated by the Republican National Committee (RNC), which says its goal is simply “to cause chaos.” 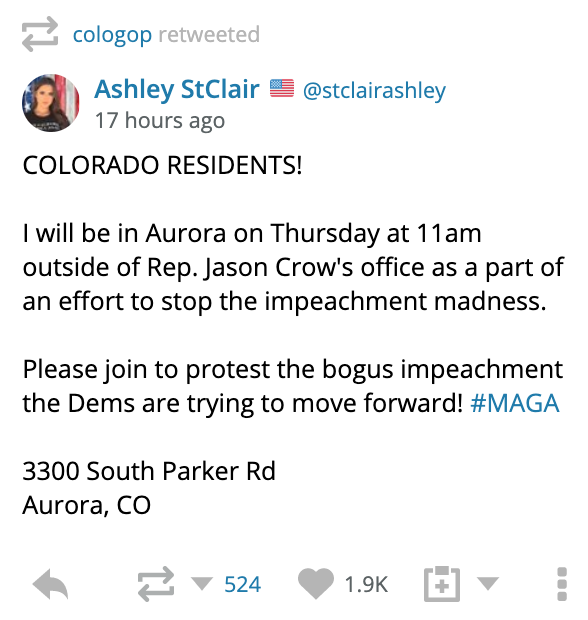 The press conference will call on Rep. Jason Crow (D-CO) to “drop the impeachment inquiry against President Trump,” according to a news release. The event takes place at Crow’s Aurora office at 11:00 a.m. today.

The website features photos of three of the four congresswomen known as “The Squad,” women of color at whom Trump has tweeted racist insults in recent months.

St. Clair was in Aurora back in July to counter-protest the pro-immigration rally that took place at the contract ICE facility.

Trump remains unpopular in Colorado, according to multiple polls, so unpopular, in fact, that former Congressman Mike Coffman blamed his defeat to Crow directly on Trump.

There’s no evidence that Crow’s district is feeling any more warmly toward Trump now.

Still, the RNC is targeting Crow as part of a $2 million advertising campaign for allegedly not “reaching across the aisle” to work with Trump.

As part of this, the RNC has also set up a StopTheMadness website, which will be a “one-stop clearing house to defend the president — including opportunities for people to sign up as a volunteer, details on how to show up to a counter protest, and more.

“The Democrats refuse to accept the results of the 2016 election and are on a never-ending fishing expedition to tear down President Trump,” states the website. “We need your help in standing up to these members of Congress across the nation to stop the madness!”

The site’s centerpiece is a video that links the impeachment inquiry to violence. Besides Pelosi, it features three members of Congress: Rep Maxine Waters (D-CA), Rep. Ayanna Pressley (D-MA) and Rep. Al Green (D-TX). All three are African-American.

Jason Salzman contributed to this report.