Trump’s advisers said they envision a “split screen” strategy in the coming weeks. The president is considering stepping up his fall schedule of campaign rallies at arenas across the country to galvanize his supporters outside of Washington and portray House Democrats as liberal insiders who are focused on impeachment instead of governing. [Pols emphasis]

If the House is skirting its governing responsibilities to focus on impeachment, then what is the Senate’s excuse? Senate Majority Leader “Moscow” Mitch McConnell and friends haven’t been governing for most of 2019.

Senate Majority Leader Mitch McConnell and Sen. Cory Gardner yuck it up on the Senate floor.

Senate Republicans are responding to questions about President Trump’s Ukraine scandal — and associated impeachment proceedings — with what you might call “skeptical irritation.” Trump defenders have tried to brush aside questions of impropriety while simultaneously putting on a show about how the Senate should be focused on policy work instead of political squabbles — a particularly absurd position to take considering the fact that Senate Majority Leader Mitch McConnell has famously refused to even allow discussions on dozens of pieces of legislation passed by the House of Representatives (McConnell refers to himself as the “Grim Reaper” for progressive policies).

Colorado Sen. Cory Gardner is taking a typical mealy-mouthed approach in response to mounting questions about the Trump administration, but he has largely settled on the idea that the Senate should be focused on other issues. Gardner was initially noncommittal about his reaction to reports of a whistleblower report, as Politico reported on Tuesday:

Gardner said Trump’s conversations with the president of Ukraine about Joe Biden and his family as well as a whistleblower complaint about the president’s conversations with a world leader are a “serious issue.” Asked if he still supported Trump’s reelection, Gardner declined to address the question: “Let’s find out what’s happening. Let’s get to the bottom of this.”

“I’m not going to get in front of the facts that I simply don’t have right now,” he added. [Pols emphasis]

Later on Tuesday, Gardner issued a statement calling impeachment a step too far:

Today the Senate unanimously voiced its support for the full release of the whistleblower report and the Senate Intelligence Committee will be conducting a formal inquiry, which I support. Starting an impeachment inquiry to appease the far-left is something the majority of Americans do not support and will sharply divide the country. [Pols emphasis] Instead, we should focus our efforts on finding real, bipartisan solutions to lower health care costs, solve our broken immigration system, and protect our public lands.

If this statement doesn’t raise your blood pressure a bit, then you really haven’t been paying much attention to Congress in the last year. Gardner is saying that Congress should not pursue impeachment proceedings against President Trump because it does not align with public opinion in the United States. Available public polling has generally shown a lack of support for the idea of impeachment, but those numbers are changing as more information comes out about Trump’s Ukrainian shakedown (the latest numbers indicate that voters are split on the topic, which is an increase in support from recent months). Regardless, it is absolutely absurd for any Republican Senator to attempt to paint impeachment as folly because of public opinion polls.

The chart below shows just how much Senate Republicans care about public opinion: 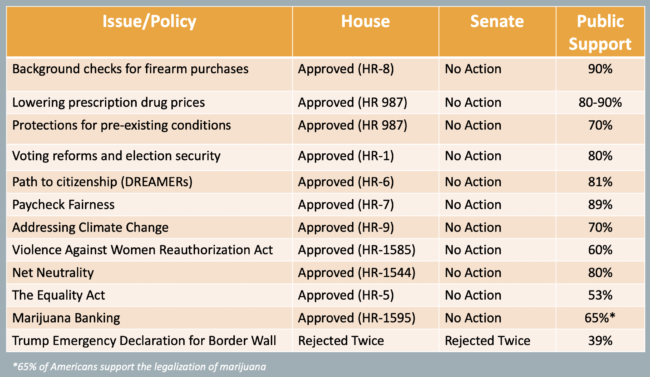 On Wednesday, Sen. Gardner voted for the second time this year to support Trump’s “emergency declaration” for border wall funding, even though only 39% of Americans agree with the idea. Gardner cast this vote the day after issuing a statement opposing impeachment because of a lack of public support.

Senate Republicans who support President Trump are free to oppose the idea of impeachment, but they don’t get to hide behind “public opinion” as a rationale.