Right behind you, Mr. President!

As Roll Call reports, the Senate today voted once again to reject President Trump’s “emergency declaration” for border wall money, though it is a largely symbolic move since there aren’t enough votes in the Senate to override a promised Presidential veto:

Eleven Republicans joined 43 Democrats in support of ending the emergency declaration, which allowed the administration to repurpose $3.6 billion in funds appropriated for military construction projects. That money has been diverted to border wall construction…

…Both chambers previously voted to end the Feb. 15 emergency declaration, but without sufficient majorities to override Trump’s veto, which immediately followed the Senate’s passage in March. By law, Congress has the ability to reconsider ending national emergencies every six months, which enabled Wednesday’s vote.

The resolution passed with the support of 11 Republican Senators — none of who are named Cory Gardner. For the second time this year, Sen. Gardner voted in support of President Trump’s emergency declaration for stealing money from other projects, and he’s not done yet:

New: @SenCoryGardner will vote today to confirm that he’s ok with the president stealing $8 million from #PetersonAFB for a wall Gardner doesn’t support & which Trump told us Mexico would pay for. #fixed #copolitics #cosen https://t.co/uhWLfbbAXF

Senator Gardner will apparently also support the backfill of money stolen from shovel-ready military projects, putting the proverbial cherry on the top of a pretty amazing policy waffle; you may recall that Gardner claimed he was opposed to building a border wall until literally hours before Trump made his “emergency declaration,” and now he’s ready to endorse a giant check for that exact purpose. As the Denver Post wrote earlier this month:

“It’s unfortunate Gardner can’t defend Colorado and the U.S. Constitution at the same time, or even one at a time, or just one or the other.”

Gardner voted “NO” on a similar resolution of opposition back in March, which led directly to the Denver Post’s stunning un-endorsement of the Yuma Republican. When news of this second vote on Trump’s declaration was breaking a few weeks ago, Gardner again pretended that he was undecided, which was transparently silly. In a pitch-perfect response to Gardner’s second vote, ProgressNow Colorado sent out a statement that was basically a cut-and-paste from their reaction last March: 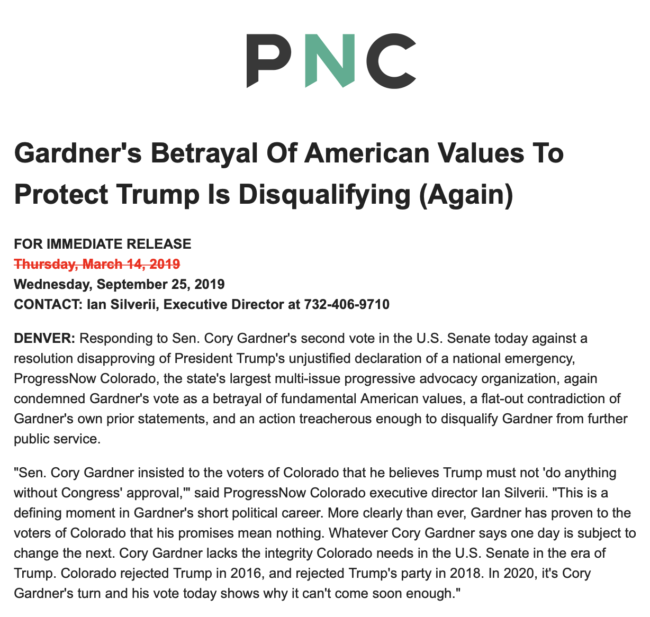 Two can play that game.

As Democratic Party Chair Morgan Carroll said in a statement after the vote: “Senator Cory Gardner had a very clear choice with today’s vote: double down on his support for Trump’s unconstitutional power grab, or prevent Peterson Air Force Base from losing $8 million in funding. Gardner chose Trump over doing what’s right for Colorado.”

Senator Cory Gardner may hail from Colorado, but he’s always going to choose Trump over his home state.