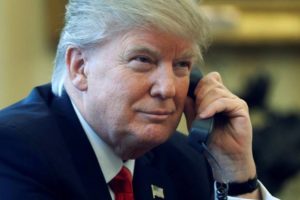 The controversy surrounding an alleged whistleblower complaint involving President Trump and Ukraine is quickly becoming a full-blown crisis for Republicans. A nonprofit government watchdog group has filed a complaint with the Federal Elections Commission and the Department of Justice, accusing the Trump administration of illegally soliciting a political contribution from a foreign country. Also today, Senate Minority Leader Chuck Schumer called for investigative hearings backed by subpoena powers, as CNN reports :

Schumer calls for hearings “to determine exactly what prompted the whistleblower to file this urgent complaint,” and says they should feature testimony from a host of administration officials, including acting Director of National Intelligence Joseph Maguire and Secretary of State Mike Pompeo. Schumer also calls for testimony from Trump’s private attorney Rudy Giuliani…

…Schumer’s letter calls on Senate Republicans to demand that the White House release the transcript of the conversation between Trump and the Ukranian President. It also asks that Trump administration officials be identified “who directed that $341 million of security assistance to Ukraine be delayed.”

Senate Majority Leader “Moscow” Mitch McConnell responded to Schumer’s request by accusing Democrats of politicizing the whistleblower complaint, which is a particularly absurd accusation given the fact that the complaint is fundamentally about American politics.

As NBC News reports, Trump keeps talking himself into a deeper and deeper hole on this controversy:

President Donald Trump on Monday said he had tied vital funding for Ukraine to that country’s handling of corruption — which he has alleged Vice President Joe Biden’s family was engaged in there — before denying just hours later he’d made any such demand. [Pols emphasis]

“We want to make sure that country is honest. It’s very important to talk about corruption. If you don’t talk about corruption, why would you give money to a country that you think is corrupt?” Trump told reporters Monday morning in New York, when asked what he had spoken about with Ukraine’s new president in a July phone call…

…But later in the day, during a meeting with the Polish president, Trump denied that he told Zelensky that Ukraine could only have the military aid they were seeking if they investigated the Biden family.

This pattern of uncertainty on UkraineGate has been a consistent theme among Trump supporters. In an interview last week with CNN’s Chris Cuomo, Trump attorney Rudy Giuliani stuck his foot in his mouth by admitting that he asked Ukraine to “look into Joe Biden” just moments after he denied the same charge.

As NBC News notes, Giuliani made a similar mistake today in an interview with Fox Business:

“Did the president threaten to cut off aid to the Ukraine?” Fox Business host Maria Bartiromo asked Giuliani.

“No, no, that was a false story,” he responded.

“One hundred percent?” she replied.

As of this writing, Trump is back to denying that he solicited election help in exchange for foreign aid. As the Washington Post explains:

“No, I didn’t,” Trump said when asked whether he told Ukrainian President Volodymyr Zelensky that he would obtain $250 million in stalled U.S. aid only if he agreed to investigate the Bidens. Slamming the former vice president for doing what he said was a “very, very bad thing,” Trump added: “I didn’t do it … when you see the call [transcript], you’re going to be very surprised.”

We’ll keep you updated on Trump’s denials and non-denials as best we can.