At Least It’s Not Your State House 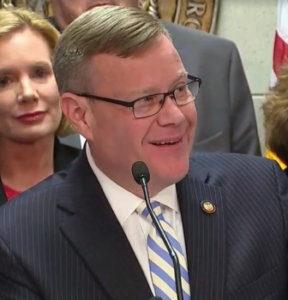 As the Raleigh News & Observer reports, North Carolina House Republicans pulled a fast one today while many Democrats were away from the chambers commemorating the 9/11 terrorist attacks–using the absence of most of the Democratic minority to jam through an override of Gov. Roy Cooper’s veto of the GOP-controlled legislature’s budget. It’s the latest treacherous move by Republicans in that state’s continuing partisan battle over expanding Medicaid:

In a surprise move Wednesday morning, the N.C. House of Representatives voted to override Gov. Roy Cooper’s veto of the state budget with just over half of the 120 members present to vote.

Democrats in the chamber objected to the bill being brought up, saying they were told there would be no votes during the 8:30 a.m. session and that it was just a formality so work could begin. Rep. Jason Saine, a Lincolnton Republican, made the motion to reconsider the state budget and chaos in the chamber quickly ensued…

Moore ignored the objections of the Democrats that were in the room and instead mowed through the vote with only 64 members voting. The vote was 55-9. Later, multiple Democratic House members who were there but who weren’t able to vote in time had their votes recorded as “no.” But it still wasn’t enough to change the outcome.

About three hours after the morning vote, Cooper held a press conference to condemn Republicans for what he called “an assault on our Democracy.” He’s been negotiating the budget with Republican leaders for months and was caught off-guard by Wednesday’s vote.

“Today, on the 18th anniversary of 9/11, while the state was honoring first responders, Republicans called a deceptive, surprise override of my budget veto,” he told reporters.

Democrats in the North Carolina House say Speaker Tim Moore explicitly told them there would be no votes on the morning of the 9/11 anniversary, freeing them up to attend other events. We suppose it might have been a telltale warning that Republicans were not at any 9/11 commemorations themselves, but in parliamentary give-and-take like everything else there’s a natural inclination to take people at their word.

Looks like North Carolina Democrats won’t be doing that again.