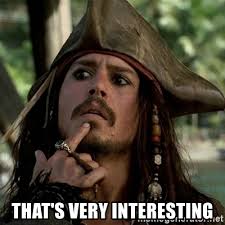 The Colorado Sun reports on some surprising new polling data about Proposition CC and TABOR refunds in general:

A survey conducted by Republican firm Magellan Strategies found that 54% of likely 2019 general election voters intend to approve Proposition CC, while 30% said they were going to reject the question. And 15% said they were undecided. [Pols emphasis]

“You have to give the Democratic legislature and governor credit, because the language of the ballot question is very simple and very good,” said David Flaherty, who leads Louisville-based Magellan. “It’s not your typical ‘shall taxes be raised by $10 billion for transportation or roads?’ It’s a very simple ask and it doesn’t even mention TABOR.”

He pointed to the fact that 32% of Republicans said they intended to support the measure as proof of the well-written language by proponents, given that conservatives are typically fierce defenders of TABOR, Colorado’s complicated tax law limiting government growth and mandating that voters approve any tax hike.

Those polled were read the exact ballot language and then asked if they would support the measure when they vote in November.

The full polling memo from Magellan Strategies is available HERE. 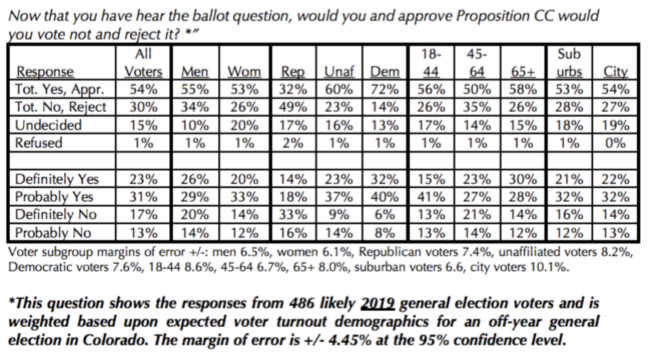 Proposition CC is a measure for the November 2019 ballot that was referred by the state legislature earlier this year. It essentially asks voters to allow the State of Colorado to attain excess revenue — for transportation and education funding — that would otherwise be returned to taxpayers in very small amounts under a formula established by the 1992 “Taxpayer’s Bill of Rights” (TABOR).

As anyone familiar with Colorado politics well knows, attempting to make any sort of changes to TABOR has typically been an arduous and often unsuccessful task. It is a huge surprise, then, that 54% of likely general election voters already support the idea of Proposition CC — particularly given that there is still no organized campaign promoting the measure. Republican opponents of Prop. CC have been out in force for months, with funding and support from groups like Americans for Prosperity and big-name fist-shakers such as Walker Stapleton and Heidi Ganahl leading the charge. In other words, Prop. CC is viewed favorably by voters despite the fact that nobody is telling them good things about the measure — and perhaps because there is active opposition from well-known Colorado Republicans.

So, what’s happening here? As Magellan Strategies notes, while 46% of respondents still view TABOR favorably, only 20% say that they are “very familiar” with the 1992 ballot measure. Those respondents who dislike Colorado’s funding restrictions are well-tuned to the anti-TABOR messaging:

“The primary reasons 36% of respondents have an unfavorable opinion of TABOR is the belief that the amendment has had a negative impact on adequate funding for public education, roads, transportation and other government services.”

It’s way too early to get too excited about these polling numbers if you support Prop. CC, but opinions on TABOR are clearly trending in a negative direction. Some of that is undoubtedly because many Colorado voters have no familiarity with TABOR after 27 years; Colorado’s recent blueward tendencies also play a significant role.

Should Prop. CC supporters manage to scrap together a semi-decent campaign this fall, we could be looking at a very interesting election night in November.