UPDATE: They’ve pulled the offending part of the signup form down now, but not before it was saved for posterity fairly widely we’re told. And no, please don’t post all 4,920 names here, that would really clutter up this thread.

Up next, we would assume, will be a carefully-worded statement about how the Gardner campaign takes your privacy seriously, your credit card information is secure if you donated online, really, we swear…

And if we can toot our own horn for a moment–we’re not Colorado’s most widely read and discussed political website for nothing. About 30 minutes after this post went up, the Gardner campaign made the change. If you follow Colorado politics, no matter your political affiliation, then you follow Colorado Pols.

Republican Cory Gardner is easily the Colorado king of the self-inflicted wound among all candidates running for office in 2010. It seems that hardly a week goes by without another major gaffe committed by his campaign. Sometimes (today for example) nary a day goes by before another screwup emerges.

And here’s the afternoon edition: want to know who’s on CD-4 candidate Cory Gardner’s email list? We’re going to take a wild stab in the dark and guess that he doesn’t want you to know with any kind of specificity, but we were surprised to discover a short while ago that we can give you a number: 4,920.

And because Gardner’s campaign website is apparently about as safe as an offshore oil rig, we can give you names, too: 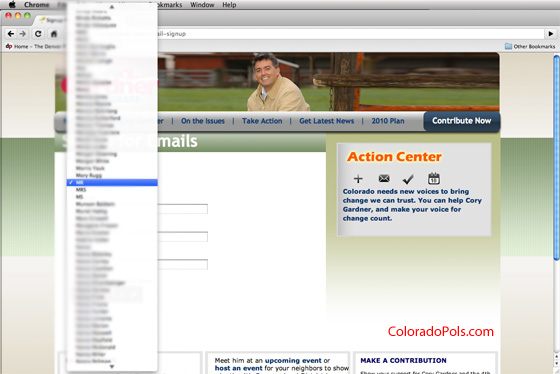 That’s the signup page for Gardner’s website. If you click on the “title” drop-down field on this page, you do get the expected selections of “Mr.,” “Ms.,” etc.–and somewhere around 4,920 first and last names. These are presumably the full contents of Gardner’s email database, information which–in terms of numbers as well as the names themselves–his opponents are glad to have. It’s not like a simple list of names represents an identity theft threat or anything, any more than a phone book does, but it’s just so marvelously stupid. Counterproductive, too–voter file match, anyone?

We could assume that it is safe to do other things, like making a donation, through Gardner’s website, but really, who wants to make that assumption after seeing this screw-up online? In fact, we’re going to go out on a limb here and guess that there aren’t going to be a lot of people entering any information on his website any time soon after this word gets out.

And yes, this is your cue: should probably go ahead and fix that.