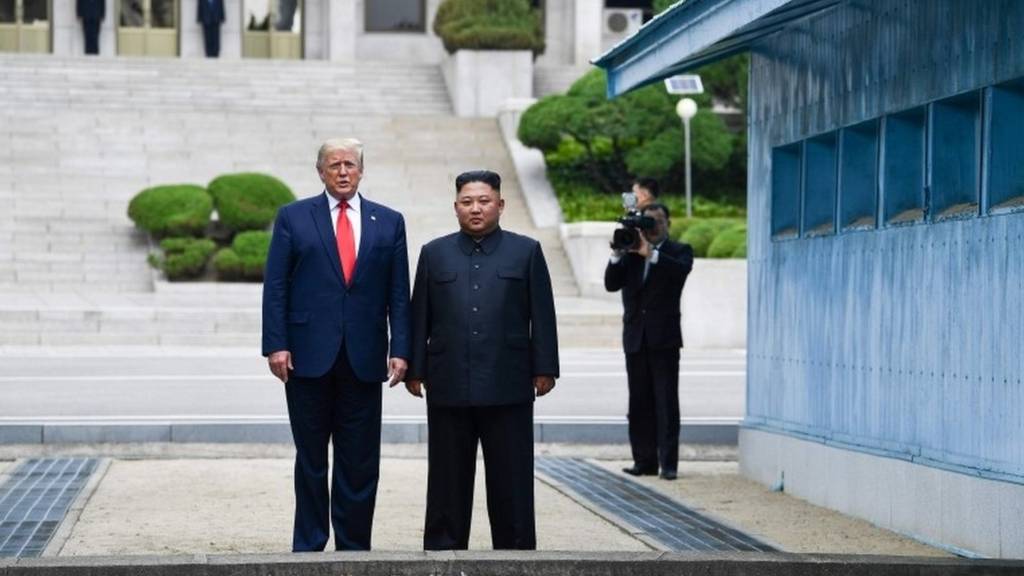 CNN reports while a strange kind of history is made at the demilitarized zone between North and South Korea:

President Donald Trump shook hands with Kim Jong Un on Sunday and took 20 steps into North Korea, making history as the first sitting US leader to set foot in the hermit kingdom.

Trump crossed the low stone curb separating the North and South at 3:45 p.m. local time, making his way alongside a grinning Kim into a country that’s long been a global pariah for its nuclear ambitions and dismal record on human rights.

The event, seemingly spontaneous and broadcast live, took to a new level Trump’s showman instincts and view of diplomacy as a test of interpersonal skills. Afterward, Trump said he agreed with Kim to revive staff-level talks that had collapsed after their last summit in February.

The issue of engagement with North Korea had been relegated to the political back burner for the last few months following the failed second summit between President Donald Trump and North Korean Supreme Leader Kim Jong Un in February in Hanoi, Vietnam. And that was seemingly just fine with Sen. Cory Gardner of Colorado, who has been forced to swallow Trump’s erratic engagement strategy out of political necessity while still trying to maintain a hard line against North Korea’s nuclear ambitions and human rights record.

Unfortunately for Sen. Gardner, Trump’s dramatic crossing of the DMZ into North Korea comes right after an interview he gave to Colorado Public Radio Friday in which Gardner slams the idea of another reward to Kim Jong Un–comments that, needless to say, did not age well through the weekend:

“I don’t understand what a third summit would do, other than stall and give Kim Jong Un more time to continue to flaunt international and U.S. law,” Gardner said…

Gardner is concerned that China and Russia have eased their sanctions pressure on North Korea, and that since the first summit, even the U.S. has begun to allow more waivers on sanctions. The senator dismisses both meetings between Trump and Kim as full of unfulfilled promises and he’s not convinced a third summit would bring any different results.

“I don’t understand why the president would want to meet with a person who has not changed a single bit,” Gardner said. [Pols emphasis]

Sen. Gardner, call your office! It’s safe to say that headlines like this one:

Are a thing of the past.

Where Sen. Gardner goes from here is anybody’s guess, but with the conservative media now lining up to shower Trump with praise for his “historic” 20 steps into North Korea to meet again with North Korea’s Supreme Leader it’s going to be difficult for Gardner to dissent publicly. Restarting talks that stalled in February is not going to produce quick results either way, so Gardner has the choice of crossing not just Trump but his fellow Senate Republicans, or finding a way to comport what he said two days ago with Trump’s actions yesterday.

We’ll update if and when Gardner figures out how to thread this political needle. Gardner has endorsed Trump’s re-election, but just in the last few days Trump has made such a mockery of Gardner from Russia to North Korea that it’s simply impossible to take this story’s description of him as a “top congressional authority” on foreign policy seriously.