At Least It’s Not Your Fugitive GOP Senate Minority

Oregon’s State Capitol building was shut down on Saturday as a safety precaution, police said, in the wake of a bitter partisan divide that had Republican lawmakers walked out to block a vote on a bill to reduce climate change-causing gases…

Some right-wing militia groups have expressed support for the absent Republican lawmakers, and opponents of the bill to cut greenhouse gas emissions below 45 percent of the state’s 1990 levels by 2035 staged a small rally on Saturday at the Capitol building in Salem.

“We have been monitoring information throughout the day that indicates the safety of legislators, staff and citizen visitors could be compromised if certain threatened behaviors were realized,” said Oregon State Police spokesman Captain Timothy Fox said by email.

“The State Police superintendent just informed the Senate president of a credible threat from militia groups coming to the Capitol tomorrow,” the email read. “The superintendent strongly recommends that no one come to the Capitol and President Courtney heeded that advice minutes ago by adjourning until 10 a.m. Sunday. Please make sure your staffs know not to come in tomorrow.”

…Then right-wing militia groups publicly announced that they would provide refuge for the fleeing Republicans.

“These people are all armed and prepared to put themselves in front of senators to prevent arrests from Oregon State Police specifically,” a member of the Oregon III% organization told TPM. [Pols emphasis]

If you thought this year’s no-holds-barred obstruction by minority Republicans in the Colorado General Assembly was bad, hope and pray that what’s happening in Oregon right now does not represent the next “new normal.” 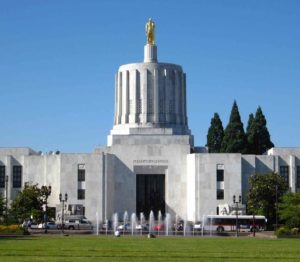 As the Los Angeles Times reports, an impasse between Oregon’s Gov. Kate Brown and the state’s 18-12 Republican Senate minority has escalated into a full-blown parliamentary crisis–one that in at least some respects outdoes any shenanigans we saw this year from Colorado Senate Republicans seeking to obstruct the Democratic majority’s agenda:

Oregon Gov. Kate Brown has deployed the state police to try to round up Republican lawmakers who fled the Capitol to block a vote on a landmark economy-wide climate plan that would be the second of its kind in the nation.

Minority Republicans want the cap-and-trade proposal, which is aimed at dramatically lowering the state’s greenhouse gas emissions by 2050, to be sent to voters instead of being instituted by lawmakers — but negotiations with Democrats collapsed, leading to the walkout, Kate Gillem, a spokeswoman for Senate Republicans said Thursday.

Oregon State Police can force any senators they track down in the state into a patrol car to return them to the Capitol, although the agency said in a statement that it would use “polite communication” and patience to bring the rogue lawmakers back.

Readers will recall that during a particularly fraught moment of obstruction by the Colorado Senate Republican minority during this year’s session, the absence of numerous Republicans from the chamber nearly prompted Senate President Leroy Garcia to dispatch State Patrol to return absent lawmakers to the Capitol. Colorado doesn’t have the same rules for establishing a quorum to do business, so fleeing the Capitol en masse to protest the fact that they do not have a majority wasn’t an option. Otherwise we’re certain Colorado Senate Republicans would have tried it.

But as the Times continues, the rhetoric from at least some Oregon Republican Senators is getting ugly enough that we honestly wonder who among Colorado Republicans would have the nerve to match it:

Republican senators appeared unfazed and ready to dig in.

“Send bachelors and come heavily armed,” Sen. Brian Boquist, [Pols emphasis] a Republican from Dallas, said late Wednesday as the prospect of a walkout loomed. “I’m not going to be a political prisoner in the state of Oregon. It’s just that simple.”

Folks, we know political debates get heated. But if a sitting Republican lawmaker threatening deadly force against law enforcement from the state he represents performing lawful duties does not shock the conscience, we don’t know what possibly could. How can this man continue to serve in office?

The legislation underlying the standoff in Oregon is a bill to reduce the state’s greenhouse gas emissions to meet ambitious targets much like Colorado’s own Climate Action Plan passed into law this year. Oregon’s law goes further to operationalize a “cap and trade” approach to reducing emissions, but its long-term target for reducing emissions is similar to Colorado’s–and in line with the scientific consensus of what is minimally necessary.

The moral of the story? Colorado Republicans freaked out this year, but in not just freaking out but pulling out all the stops to obstruct the Democratic majority they were far from alone. Republicans across the country appear to be resorting to extreme measures in order to stymie Democrats in pursuit of the agenda they won on in 2018’s “Blue Wave.” Any time a story gets written about “Democratic overreach” in Colorado, the context that this is what Republicans are saying everywhere they are not in control is very important.