Bennet “Sister Souljas” Medicare For All

Dave Weigel of the Washington Post directs us to the latest digital ad running in support of Sen. Michael Bennet’s presidential campaign–and much like Gov. John Hickenlooper left many observers scratching their heads after striking out against “socialism” to the rowdy boos of California Democrats, Bennet is taking what can only be called a triangulation approach against liberal firebrand Bernie Sanders and one of Sanders’ chief policy planks: 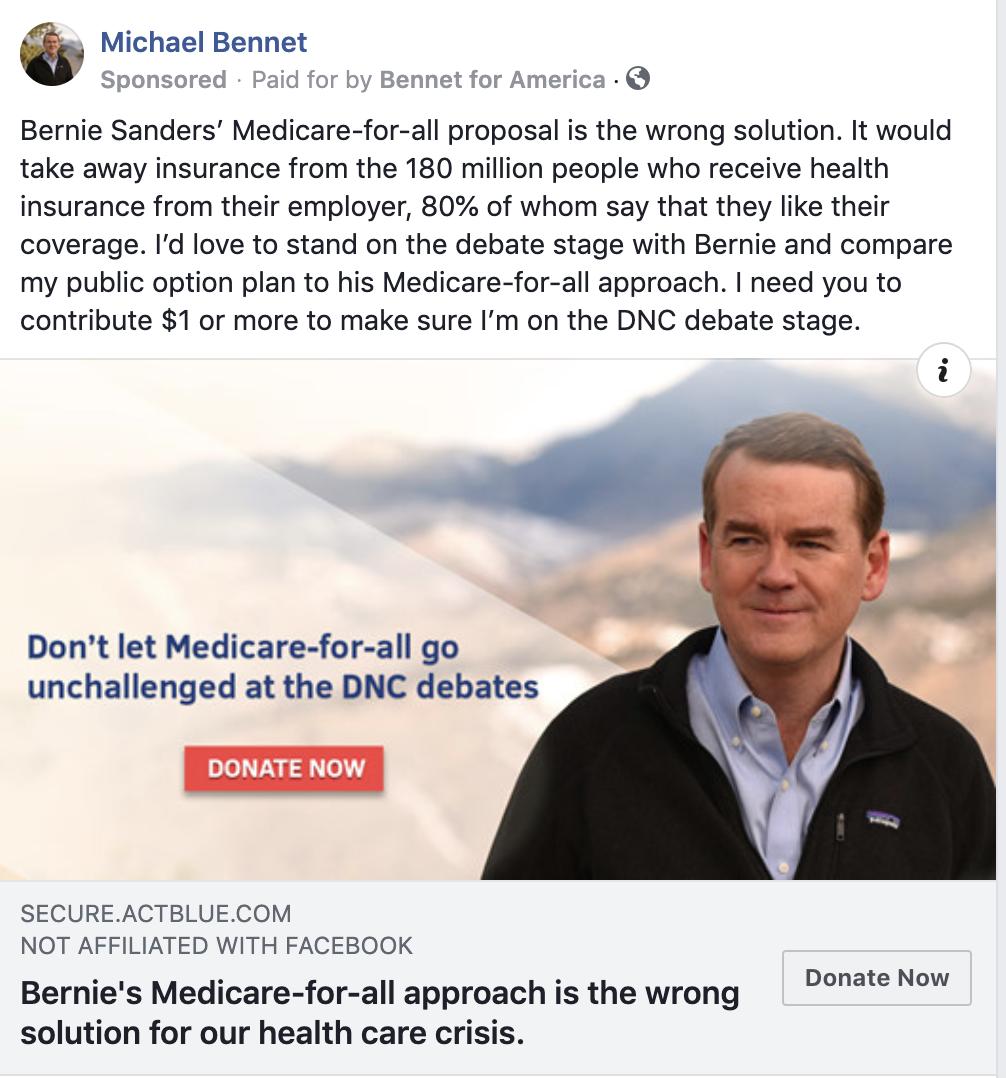 As readers may know, but would be excused for not knowing like we expect the majority of Americans do not know, Sen. Bennet has his own policy prescription for health care reform that he calls “Medicare X.” Medicare X is not a universal coverage plan but closer to what was known during the debate over the Affordable Care Act as a “public option.” It’s a plan with a lot to offer, and Bennet makes arguments for Medicare X that sound an awful lot like the progressive side of the debate over “Obamacare.” But in this case, Bennet is making disingenuous claims about Medicare For All “taking away insurance” that are much too close to rank GOP falsehoods about “insurance cancellations” under the ACA for us grant a pass.

As readers should know, Sen. Bennet is running toward the back of a 20+ pack of presidential candidates, and is doing whatever he can to obtain enough support both financially and in polling to qualify for the second round of presidential debates. This tactic is obviously an attempt to broaden Bennet’s support by attacking the Democratic frontrunners from the right, arguing that their more ambitious health reform agenda “won’t work.”

The problem is of course that this message, just like Hickenlooper’s off-key railing against “socialism” in front of California Democrats, is pretty much the opposite of persuasive to Democratic primary voters. It’s a message aimed at a tiny if sometimes decisive wedge of swing voters in a general election, but the job of a primary candidate is to win the hearts and minds of the ideological base. We’re not saying that Bennet is even wrong–it’s arguable after the last painful decade of partisan warfare over health care in this country that a dramatic move in either direction is politically very difficult to conceive.

But there’s no upside in lecturing primary voters at the precise moment they are looking to be inspired.