As a former CU Regent, couldn’t agree more with Senator Udall and Governor Polis — am hopeful the Board will listen to the many voices calling for a selection process that unites the university community. https://t.co/AqWzLg3FYI

We didn’t expect the Republican-led Board of Regents to choose a president who the Boulder campus would welcome with open arms. But we did expect them to select a finalist who could bring together the board and the diverse elements that comprise CU with a collective sense of confidence in the new president’s ability to lead.

Unfortunately, Mark Kennedy has shown over the past two weeks that he is not that individual. We urge the regents to not force a vote Thursday on Kennedy, which is certain to be split after two regents — Irene Griego and Linda Shoemaker — have publicly said they will not support Kennedy. If a vote must take place now, we have no option but to urge the nine regents not to support Kennedy and to begin the search for president anew. 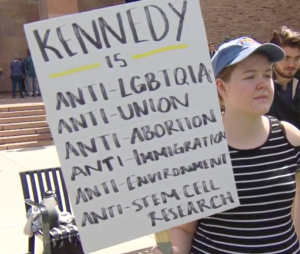 As the Colorado Independent’s Susan Greene reports, despite the near-universal negative response to the “sole finalist” for the next President of the University of Colorado, former Minnesota Republican congressman Mark Kennedy, the one-seat GOP majority on the CU Board of Regents means the vote tomorrow could still defy the consensus from faculty and students that Kennedy isn’t fit for the job:

CU scholars, researchers, adjunct professors, other faculty members and staffers, students and alumni immediately started voicing concerns about Kennedy on social media, on campus, in class, and on a portal the university created for public input. As of Monday morning, there were 2,812 submissions…Overall, 129 commenters gave Kennedy an “Outstanding” ranking, while 1,035 said he would have “Difficulty in most areas.”

Regent Chance Hill, a Republican from the 5th Congressional District, has dismissed Kennedy’s detractors, whom he refers to as Far Leftists, and decried what he calls a “gauntlet of unreasonable attacks, inaccurate news headlines, and slanderous smears along with a fixation over a few votes (Kennedy) cast — out of more than 4,000 — during his six years in Congress.”

“With all of their purported progressive enlightenment and so-called open-mindedness, they cannot tolerate the notion of a Republican occasionally challenging their liberal college fiefdoms where people suffer real negative consequences if they dare challenge the Leftist orthodoxy that dominates campus culture,” Hill wrote on Monday.

As of now, two of the four Democratic members of the Board of Regents, Irene Griego and Linda Shoemaker, and announced they will vote against Kennedy’s nomination. Former Senator Mark Udall called for the search to be re-opened this week, after Gov. Jared Polis made a similar call the week prior.

Although the Republican majority on the Board has been downright bellicose (see above) in their dismissal of concerns raised and not properly addressed during Kennedy’s tour, it’s not yet a foregone conclusion that Kennedy will be approved. Resistance to Kennedy is significantly greater than the opposition to outgoing President Bruce Benson, who despite his conservative political record had deep local ties. Kennedy has nothing to offer except a promise to do better than his record tells us he will.

And with that, we’ll have to wait and see how insulated the Regents are from the community they serve.