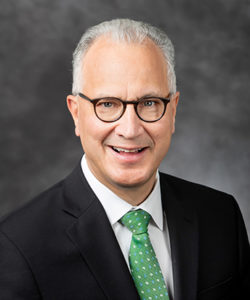 Yesterday, the newly-minted “sole finalist” for the position of President of the University of Colorado, former GOP Rep. Mark Kennedy of Minnesota, began his tour of the CU system’s four campuses–a crucial opportunity for Kennedy to ingratiate himself with students and faculty, and address the many questions about Kennedy’s anti-LGBT, anti-reproductive choice record in Congress that have resulted in angry protests over his selection to lead Colorado’s flagship public university.

“Mark Kennedy as a leader is problematic, and he’s unqualified,” said CU Law Student Perdeep Singh-Badhesha. “I think this is going to be the easiest of all the forums he goes to. These were softball questions, and I think he still did a very poor job.”

Kennedy fielded numerous questions from the crowd, saying his political past won’t have an impact on how he handles businesses as president.

“None of the beliefs that have caused much of the controversy are going to have any impact,” [Pols emphasis] said Kennedy, whose votes against gay marriage and in favor of abortion restrictions as a Minnesota congressman in the early 2000s have drawn protest in some quarters.

“And (those beliefs) are largely irrelevant to what the president does. … I would hope I could gain your trust, respect and support and have that strong working relationship because faculty are the heart of any university.”

Here’s the deal: if you do not think the President of the University of Colorado’s voting record in Congress against LGBT and abortion rights is relevant to his duties, you are probably not a member of those two classes of people. If you are an LGBT student, staff, or faculty member, having a President of your university who has proven himself inimical to your rights is a huge problem. It’s worse than the present example of Bruce Benson, who although certainly a conservative Republican does not have a voting record as a lawmaker openly hostile to LGBT rights.

Kennedy says he doesn’t think it’s fair for people to keep asking him about his congressional record. “I’m not running for congress.”

To us, this statement perfectly captures the disconnect between a man who cast his lot long ago, and present ambitions that simply don’t fit with his record. Mark Kennedy may not be “running for Congress,” but it’s absurd to suggest that his record in Congress is not germane to the decision of whether he is appropriate to serve as President of the University of Colorado. Perhaps most damning, there’s no evidence of contrition over these votes against the rights of large portions of the CU community at all, only the insistence that “the beliefs”–meaning Kennedy’s beliefs–are “largely irrelevant to what the President does.”

In short, everyone who imagined this guy would make a good President of the University of Colorado, including his partisan Republican supporters on the Board of Regents, made a mistake that invites fundamental questions about their own competence. Not only is it time to start over with the search for a new CU President, but the next candidate(s) need first and foremost to not insult the CU community’s intelligence like Mark Kennedy did.