#LOL: Senate Republicans Yuck It Up Over Obstruction 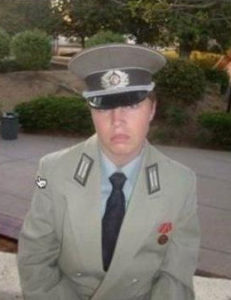 For those who haven’t had the pleasure, Sage Naumann is the communications director for the Colorado Senate GOP Minority Office–having succeeded the notably nasty former Colorado Springs City Councilman Sean Paige in the role following the loss of the majority in the 2018 elections. Naumann himself is no stranger to controversy, after a school-age bout of Nazi cosplay got him into trouble when he ran for the school board in ritzy Carlsbad, California:

He says he now regrets the Halloween costume and his Facebook comments, such as, “Sad Natsi mourns the loss of ze Fuhrer” and “Angry German waiting for candy.”

Of course, we’re as relieved as Mr. Naumann’s high school counselor to see that this youthful indiscretion wasn’t the end of his career in politics! Your mileage may vary if you prefer your communications people to not dress like Nazis. On the upside, he’s almost certainly learned his lesson and is unlikely to dress up like a Nazi, you know, going forward.

What you have here, of course, is Senate Republicans making light of obstructive tactics that a few short weeks ago were high drama–taken out on bystanders like Senate staffer Andrew Carpenter who was tasked with reading legislation at length, before Democrats remembered that Google can do the hard labor for them. Senate Republicans prevailed in court on a challenge to reading bills at lightning speed, but then had another Friday night obstruction attempt go hilariously awry. Since then, Democrats have gotten a large portion of their 2019 agenda through despite several lengthy episodes of what’s known as “Bobbing”–Sen. Bob Gardner droning on for what feels every time like hours of your life you’ll never get back.

If bumper stickers no one outside the Dome will ever understand help console Colorado’s historically small and historically bitter GOP minority, we fully support them. We’d even buy a few so we can explain the “joke” to people. It’s sure to go over well.