Colorado Senate GOP Gets Crafty, Then Gets Schooled 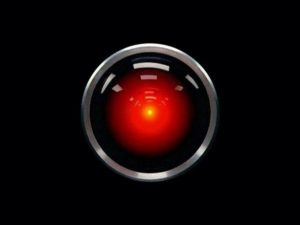 HAL reads faster than you.

All work in the Colorado Senate has come to halt thanks to a procedural maneuver invoked by a ranking Republican on Monday morning.

No committee hearings, floor debates or votes can happen until House Bill 1172 — a 2,000-page bill revising Title 12 of the Colorado Revised Statutes — is read in its entirety. Most people at the Capitol estimated that would take 60 hours…

The rules also say any senator can request a bill be read in its entirety on second reading. If the statehouse staff tasked with reading it work around the clock, it’s likely to be Wednesday before they finish — potentially delaying the paid family leave hearing scheduled for Wednesday afternoon as well as all committee hearings scheduled for Monday and Tuesday.

The GOP minority in the Colorado Senate thought they had a way to effectively gum up the works on majority Democrats today, taking advantage of the power any Senator has to order a bill read in its entirety by legislative staff when it arrives for a vote in the full chamber. The bill in question was chosen by Republicans entirely for its massive 2,000-page length, being a bill full of innocuous changes to existing dense statutory language that must all be properly referenced and explained. Presto! All business in the Colorado Senate comes to a halt.

Until Majority Senate Democrats realized they had an obvious 21st Century workaround:

That sound is five computers reading this bill at 650 words-per-minute, a clear violation of the spirit of the Colorado Constitution and the rules of the Senate. No human can understand this. #COpolitics #COleg https://t.co/mw3UEHOChb

That’s right! Rather than having a single longsuffering Senate staffer (or a team of staffers working in shifts, which was the original plan) take days to read the entire bill into the record, Democrats set up five computers to read the bill simultaneously at somewhere around 650 words per minute–reducing the days-long task to a couple of hours! There’s no requirement, after all, that the read-aloud bill be read aloud intelligibly. And since this is all a needless exercise in the era of digital content dissemination there’s absolutely no reason to adhere to anything more than the letter of the law.

The fact that Republicans chose this particular bill for its extreme length, entirely to achieve the maximum disruption not any legitimate policy interest, makes the Democratic majority’s technological turnabout fair play. The truth, as we’ve discussed in detail with the oil and gas drilling reform bill, is that Democrats are giving all of these pieces of legislation the full benefit of the legislative process–with multiple exhaustive hearings in both chambers. The only actual problem here is that Republicans no longer have a majority in any chamber with which to kill them.

The moral of the story? Parliamentary games are fun, but elections are what matter.