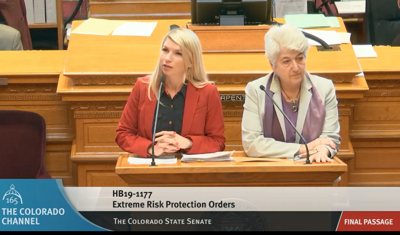 A press release from the Senate sponsors of House Bill 19-1177, the long-debated bill to create a process to temporarily remove firearms from persons found by a judge to be a danger to themselves or others that won final passage in the Colorado Senate today:

The Colorado State Senate today voted 18-to-17 to pass HB19-1177, Extreme Risk Protection Orders, a bill sponsored by Senators Lois Court (D-Denver) and Brittany Pettersen (D-Lakewood) that will save lives by allowing family members and law enforcement to request a court order to temporarily remove firearms from someone who is deemed a danger to themselves or to others. The bill now heads back to the House of Representatives for consideration of amendments.

“After years of working to pass similar legislation, I am proud that the Senate has finally voted to advance a commonsense gun safety bill that will ultimately save the lives of Coloradans and law enforcement officers,” said Senator Court. “Thoughts and prayers don’t save lives, but extreme risk protection orders will, and I look forward to seeing it signed into law.”

“This bill is supported by an overwhelming majority of Coloradans, and outside of this building, it is not controversial,” said Senator Pettersen. “We passed this bill and did what is right for our law enforcement, domestic violence survivors, our kids who just want to feel safe when they go to school, and the countless family members who have lost someone to unnecessary gun violence.”

HB19-1177 is named in honor of Douglas County Deputy Sheriff Zackari Parrish III who was killed on duty in 2017 by an individual whose mental health concerns were well-known to others around him. This legislation would give law enforcement and family members the opportunity to seek a temporary order for someone who appears at risk of dangerous behavior.

To successfully block firearm access, a petitioner would have to demonstrate a preponderance of evidence that the individual poses a significant threat to themselves or others by possessing a firearm. After a petition is filed, a court would place a temporary order for up to two weeks until a hearing determines whether a full protection order is appropriate. A full protection order could then be approved for up to 364 days.

Although Senate President Leroy Garcia voted as expected against HB19-1177, the rest of the Democratic caucus held together and sent the bill by an 18-17 vote back to the House for one more reconciliation stop before heading to Gov. Jared Polis’ desk and his expected signature. Garcia could have utilized his power as Senate President to override the majority ready to pass the bill but commendably chose not to–insulating himself politically from any potential fallout back home in Pueblo but not standing in the way of one of the biggest Democratic priorities of the session.

It’s fully expected that Republicans and the gun lobby will respond with maximum outrage to final passage of a red flag bill, and the legislation is already part of the rubric of those who want to organize a recall either of legislators or Gov. Polis. Now that the bill is passed, proponents now have the task of demystifying the legislation and reminding the short-attention-span media about the overwhelming support for the bill expressed in public polling. Despite the angry bluster from the right, it’s by no means a given that this legislation will provoke the same degree of backlash seen in 2013 against that year’s gun laws. As we’ve discussed at length in this space, the issue and the electorate have both evolved considerably.

What we can say with certainty is that a big Democratic campaign promise is about to be kept.