UPDATE: So…now what? The Washington Post breaks down the next steps. The New York Times considers 6 key questions that need answers. 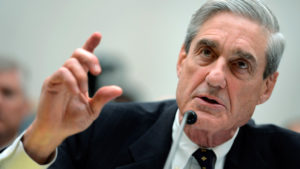 As the Washington Post and every other news outlet on the planet is reporting:

Special counsel Robert S. Mueller III has submitted a confidential report to Attorney General William P. Barr, marking the end of his investigation into Russian interference in the 2016 election and possible obstruction of justice by President Trump, a Justice Department spokeswoman said.

The Justice Department notified Congress late Friday that it had received Mueller’s report but did not describe its contents. Barr is expected to summarize the findings for lawmakers in coming days.

The submission of Mueller’s report marks the culmination of his closely held inquiry, a case that has engulfed the Trump administration since its inception and led to multiple guilty pleas from former advisers to the president. With the closing of his investigation, Congress and the newly empowered Democratic House majority will soon assess his findings – and determine what steps to take next.

We will update this post as more information becomes available.