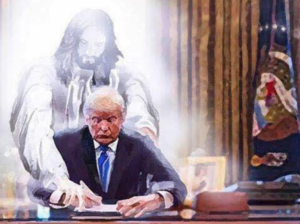 “Could it be that President Trump right now has been sort of raised for such a time as this, just like Queen Esther, to help save the Jewish people from the Iranian menace?” [Christian Broadcasting Network reporter Chris] Mitchell asked Pompeo.

“As a Christian, I certainly believe that’s possible,” Pompeo, who was visiting Israel, replied.

“It was remarkable — so we were down in the tunnels where we could see 3,000 years ago, and 2,000 years ago — if I have the history just right — to see the remarkable history of the faith in this place and the work that our administration’s done to make sure that this democracy in the Middle East, that this Jewish state remains,” he said.

“I am confident that the Lord is at work here,” Pompeo concluded.

The short–very, very short–version of the backstory to this question is that many American evangelical Christians believe the foundation of the modern state of Israel in 1948 was the fulfillment of prophecy meant in the end to culminate in the cataclysmic events of the Biblical book of Revelations. Although this would seem to indicate a ready common interest between American Christians and the Jewish state, it should be noted that according to a strict reading of the book of Revelations, the Jews will either convert to Christianity or be sent to burn in Hell for all eternity. Not surprisingly, many Jews take a dimmer view of evangelical “support” once they understand this. Isn’t it great to ponder this being the “principle” guiding America’s chief diplomat?

So, there’s that. As for Donald Trump personally, it’s a bit of a roller coaster for American Jews–between being happy about an embassy in Jerusalem, versus horrified by the resurgence of hate in America that Trump rode to victory in 2016 and then defended as “very fine people” after he took office.

With all this in mind, we’d argue that God’s got nothing to do with Trump, unless Trump is punishment.