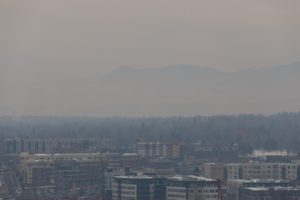 The mountains are still there. Probably. (photo of Denver area in early March, via Streetsblog Denver)

These are fine things to be discussing in a chemistry class, but not to be inhaling into your lungs in copious amounts. Concerns about air quality and Climate Change were a top priority for Colorado voters even before a disgusting gray soup settled over the Denver Metro area in recent months. At one point in early March, Colorado’s air quality measured more than three times worse than moderate air quality levels in Beijing, China, where people regularly walk around with masks over their nose and mouth.

On Thursday, Democrats in the State House of Representatives introduced legislation that is intended to clean up Colorado’s air quality: House Bill 19-1261, “Climate Action Plan to Reduce Pollution.” The bill sets goals for reducing carbon pollution by at least 25 percent by 2026, 50 percent by 2030, and 90 percent by 2050 by directing Colorado’s Air quality Control Commission to “reduce, prevent, and control air pollution throughout the state of Colorado.” As House Speaker K.C. Becker tells the Denver Post, HB-1261 contains no new fees for pollution and would have little impact on oil and gas operations that follow methane regulations.

House Bill 1261 is sure to draw opposition from some critics who will try to compare it to the “Green New Deal” proposed by Congressional Democrats, but Colorado’s legislation is focused solely on reducing carbon pollution in our state in an effort to reduce adverse health effects such as asthma, heart disease, lung disease, and cancer. 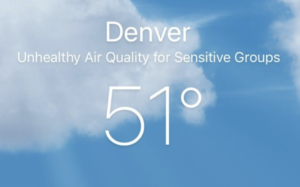 Even your phone knows that Colorado’s air quality sucks.

From a purely political perspective, this bill follows many of the promises made by Democratic candidates in 2018; its goals are widely supported by Colorado voters, as poll after poll has confirmed. A full 90% of Coloradans support increasing the use of clean, renewable energy in Colorado, and 62% believe that Climate Change is a significant issue. Polling conducted after the 2018 election further validates this approach.

As Kelly Nordini pointed out in a December opinion piece for the publication formerly known as the Colorado Statesman, voters were clear about their concerns in November:

When asked which policy issue was “most important in your vote for governor,” 42 percent of independents selected “energy and the environment” as one of their top two choices – the most of any issue tested. Coming in second place was health care at 35 percent, followed by education at 32 percent.

In other words, it wasn’t the economy, healthcare, education, immigration, or taxes that rose to the top for Colorado’s independents as they headed to the ballot box. The most important policy issue for this key voting bloc was energy and environment, with a strong plurality of the state’s independents going for pro-environment candidates.

Of course, Gov.-Elect Jared Polis won the Colorado governor’s race in a landslide against State Treasurer Walker Stapleton by running as a fierce advocate for Colorado’s environment, pledging to transition Colorado to 100 percent renewable energy by 2040, pushing for common-sense safeguards on oil and gas drilling, and calling for protecting the state’s parks and public lands.