Hickenlooper Introduces Himself to America 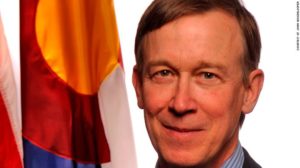 On Wednesday, former Colorado Gov. John Hickenlooper took the spotlight in the race to become the Democratic nominee for President in 2020 when he held a live CNN “town hall” event. Hickenlooper performed very well overall, but most of the attention following the event was about one specific exchange that highlights Hick’s inexperience with “soundbite politics.”

We would encourage you to watch the full town hall event yourself in order to understand the proper context for some of Hick’s remarks (for the Cliff’s Notes version, here are some key takeaways via CNN). But CNN also devotes a separate story to the one exchange that generated the most buzz on Wednesday evening:

Former Colorado Gov. John Hickenlooper said that he would consider putting a woman on his presidential ticket, and then asked why female Democratic presidential candidates are not being asked if they would select a man as their running mate.

The comment struck a number of Democrats as off base, especially considering that the nation has never had a female vice president.

“Governor,” CNN’s Dana Bash said at a presidential candidate town hall, “some of your male competitors have vowed to put a woman on the ticket. Yes or no, would you do the same?”

“Of course,” Hickenlooper said, before saying he wanted to ask Bash a question.

“How come we’re not asking more often the women, ‘Would you be willing to put a man on the ticket?’ ” he said with a shrug, to audible groans from the audience. 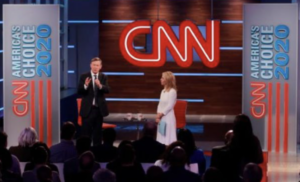 Obviously, this is not a good soundbite for Hickenlooper, but it’s much less cringeworthy when Hick gets a minute to explain:

Hickenlooper stood by the comment after the town hall, telling CNN that his point was “too often media discounts the chance of a woman winning” by asking questions like that.

What Hick was trying to do, in a nutshell, was to make the case that female candidates should be considered frontrunners on an equal plane with men and that asking a question about “would you put a woman on the ticket” is disrespectful to the women who are running for President. It’s a solid point that was inartfully articulated, and it would be a shame if it dogged Hick’s campaign for an extended period of time.

Hickenlooper also had a weird moment when telling a story about watching an adult movie with his mother — this is a yarn that he’s spun before that is also included in his memoir “The Opposite of Woe.” The story is entertaining, but the problem with telling it to a wider audience is that there is no real “moral” in conclusion; it’s not clear why Hickenlooper is talking about this, and in a Presidential race where soundbites can take on a life of their own, this probably isn’t a great clip for Hick.

Hickenlooper will certainly get better at this sort of thing the more he campaigns around the country, but “soundbite politics” are not his strong suit. This is partly because Hick just doesn’t have much experience in this regard; both of his campaigns for Governor featured massively-flawed opponents who didn’t have the ability to land solid punches. By the time Hick was running for re-election in 2014, the former Denver Mayor was a well-known character to voters along the Front Range who largely got the benefit of the doubt whenever he stumbled verbally. This is the same basic reason that Hick speaks out so often against “negative ads” — it’s easy to be critical of negative advertising when you have never had to worry about employing that strategy yourself.

Hickenlooper is not any more or less likely to win the 2020 Democratic nomination based on Wednesday’s performance. In fact, if he learns and grows from this experience as a candidate, this CNN “town hall” might even prove to be a landmark moment for his campaign.