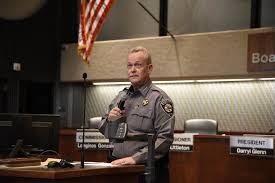 This past weekend, Elder first spoke out against the “2nd Amendment Sanctuary” measures, which are intended to block a proposed red-flag law that would allow judges to authorize the confiscation of guns from people deemed dangerous to themselves or others.

“I’ve already had threats, and a bunch of them from that lunatic fringe that don’t understand what Madison and the framers of the Constitution said,” Elder told KVOR’s Richard Randall today [listen below]. “There are provisions in place with our Constitution that say exactly how to deal with rogue legislators. And frankly, I’m going to follow what the framers said. Go read the Federalist Papers and you’ll see what I mean.”

The Republican sheriff, who opposes the red-flag measures, did not specify the nature of the threats, and he added on Facebook:

ELDER: “And what EXACTLY do you think would be the legal and appropriate thing to do? Did you read what I wrote? Do you understand that I said I would not initiate an action thru my office? This accounts for less than 1/4 of El Paso County and nothing inside any of the cities? A friend reminded me of these quotes from the Federalist papers which really sums this whole thing up nicely. “The court ensured that the will of the whole people, as expressed in their Constitution, would be supreme over the will of a legislature, whose statutes might express only the temporary will of part of the people.’ “Madison had written that constitutional interpretation must be lead to the reasoned judgement of independent judges, rather than to the tumult and conflict of the political process. If every constitutional question were to be decided by public political bargaining, Madison argued, the Constitution would be reduced to a battleground of competing factions, political passion, and partisan spirit.” Now there is some food for thought… Madison was right in my opinion (and in the opinion of the Supreme Court I might add) and I will use the Rule of Law, the guidance of Madison and the reasoned judgement of independent judges in this matter. [CTR emphasis]

The 2nd Amendment Sanctuary declarations were passed by over a dozen Colorado counties. They appear to rely on the local sheriff to stop enforcing state laws he or she finds unconstitutional, based on an alleged constitutional authority to do so.

“Do people expect a Sheriff, a Chief of Police, a Mayor, or ANY elected person to decide if a law is ‘constitutional’ or not?” tweeted Elder Saturday. “If so, I have a question about hundreds of others. I know my opinion is different than many others in the state, God knows around the country. We have a system where laws are tested and declared one way or another by the courts, don’t we?”

“I believe the point here is that we have a system that’s been in place since 1803 that is meant to hold rogue legislators in check and that is through the Supreme Court. WE MUST follow the system that provides judicial review and not allow any single individual or ruling class the power to override our Constitution.”

“How about everybody keep their heads on their shoulders, and let’s fight this [proposed red-flag bill] like a bunch of civilized Americans,” Elder told KVOR at 8 min 15 sec below.