A Few Sad Words For Ken Salazar, Statesman For Hire 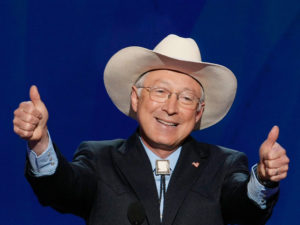 This week in Colorado politics has been dominated by the debate over Senate Bill 19-181, legislation reforming the relationship between local governments and oil and gas companies as well as changing the mission of the Colorado Oil and Gas Conservation Commission so that the agency is no longer required to “foster” the industry’s development over other considerations such as the public health and the environment.

After the “Potemkin Protest” at the Capitol Tuesday by hundreds of on-the-clock employees of the oil and gas industry–a turnout that still didn’t manage to outnumber the witnesses in favor of the bill in the subsequent legislative hearing–the energy lobby rolled out what could be their biggest metaphorical gun in opposition to SB-191: Former U.S. Senator Ken Salazar. As FOX 31’s Joe St. George reports:

A renowned Colorado Democrat is speaking out against an oil and gas bill currently being considered by state lawmakers. In a press release, Ken Salazar said the bill is “too extreme for Colorado.”

…In the press release, Salazar described himself as a “proud Democrat” who has worked to protect the environment. However, he also said that when he was a senator, liberals and conservatives worked together to make the United States energy independent.

“Colorado has played a key role in securing that energy independence for our nation. Colorado is a leader of renewable energy. Colorado is also a center of oil and gas,” the statement reads, adding that more than 100,000 Coloradans work in the industry and it provides $1 billion in funding for schools and roads.

And there you have it–a former Democratic U.S. Senator, Secretary of the Interior, and sometimes shortlisted candidate for governor or another high office, blasting SB-181 as a threat to what he calls the “Colorado energy success story.” And in an interview with the Denver Post’s Nic Garcia, Salazar went even further, slamming Gov. Jared Polis and even threatening fellow Democrats with political retaliation from the industry:

“I love Jared Polis,” Salazar said Wednesday. “Part of what I fear here is that the way this bill is written, driven essentially by a Boulder view of the world, that it jeopardizes the Democratic control that we have here in Colorado. [Pols emphasis] And that was not supposed to happen. In my many conversations during the campaign, it was about governing for everybody. Governing for a centrist point of view, bringing people together, solving problems for the long term.”

The problem with all of this, which becomes especially problematic as Salazar openly attacks fellow Democrats, is that Salazar is now one of the state’s highest-ranking lawyers for the oil and gas industry. To the credit of every local outlet we’ve seen reporting on Salazar’s blue-on-blue broadside this week, nobody has missed this crucial data point:

And with that, this becomes a very different situation. There’s simply no way to separate the fact that Salazar is being paid large sums of money by the oil and gas industry from his attacks on fellow Democrats on that very same industry’s behalf. Any attempt to do so is intellectually dishonest. For everyone who supports SB-181 and also took Ken Salazar at his word when he promised to be a protector of “Colorado’s land, water, and people,” this is a bitter betrayal–even if it was predictable, which it mostly was.

But the implied political threat on behalf of the industry that Salazar works for is over the line and can’t be abided. This isn’t an elder statesman calling for moderation. It’s one man, Ken Salazar, cashing in his reputation in order to maximize his effectiveness as a mercenary for the oil and gas industry.

That sucks. It really sucks. But it must not be rewarded.