(This is getting silly – Promoted by Colorado Pols) 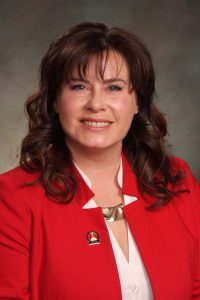 After a handful of Colorado counties declared themselves Second Amendment sanctuaries, rejecting a proposed law that allows judges to take guns from dangerous people, a Colorado lawmaker now wants her county commissioners to consider not enforcing state laws regulating the oil and gas industry.

“I definitely would encourage the commissioners to take a look at making it an oil and gas sanctuary county, too – a business sanctuary county,” said State Rep. Lori Saine, the Republican told KCOL radio Monday.

Saine made the comment in response to KCOL host Jimmy Lakey’s question about whether Weld County could be an “oil and gas production sanctuary,” in response to legislation under consideration at the Capitol that would, among other things, prioritize health and safety in oil-and-gas regulations and give more control to local jurisdictions.

Asked whether he favors Saine’s suggestion, Weld County Commissioner Mike Freeman told the Colorado Times Recorder that he strongly opposes the proposed oil-and-gas legislation at the state Capitol, but he doesn’t think that Weld County has the constitutional authority to declare an oil-and-gas sanctuary county.

“There is a little bit of difference between the Second Amendment sanctuary county versus oil and gas,” said Freeman. “And this is just my opinion. The difference is, with the Second Amendment, with the red flag bill, I think it’s a direct violation of the Constitution, which makes it much easier for us to take a stand on. I don’t really know that this oil-and-gas bill, at this point, could be declared unconstitutional.”

Freeman said he’s looking at other options to fight the oil and gas legislation.

“If the oil-and-gas bill would pass, it would devastate oil and gas production, not only in Weld County but across the state.”

Saine did not return a call seeking to know if she thinks the oil-and-gas legislation is, in fact, unconstitutional, and whether she wants the Weld County Commission to reject it–and other laws–anyway.

Also unclear is what a “business sanctuary county,” as Saine described it, would be. Would it reject all laws affecting Weld County businesses?

About a dozen states have red flag laws on the books, and none have been declared unconstitutional. The laws vary, but all rely on judges making a determination, based on evidence collected by law enforcement, that a person is so threatening to themselves or others that their weapons should be confiscated.

Red flag opponents argue that such laws can be abused, resulting in weapons being taken from people who are not dangerous.

The commissioners also stated that they’d back a decision by Weld County Sheriff Steve Reams, if he decided not to enforce the proposed red-flag law, if it passes.

Saine made national headlines earlier this year when she said blacks and whites were once lynched in equal numbers.