Rand Paul Does What Cory Gardner SHOULD Have Done

Senator Rand Paul (R-Kentucky) declared over the weekend that he will vote in favor of a resolution opposing President Trump’s “emergency declaration” for border wall funding. As Paul said during a speech in Kentucky, “I can’t vote to give the president the power to spend money that hasn’t been appropriated by Congress.” 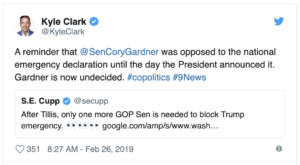 Paul’s pledge means that there are now enough votes in the Senate to pass a resolution that has already been approved by the House of Representatives. As Aaron Blake writes for the Washington Post, this resolution isn’t just a symbolic rebuke of Trump — it might well provide support for a successful legal challenge:

…it’s worth taking stock of how significant this moment is — and how it could potentially impact the battle that actually will decide the fate of the national emergency declaration: the legal case.

We have seen over and over again how a closely divided GOP-controlled Senate has come close to rebuking the president. Almost always, holdouts like Paul, Sen. Susan Collins (R-Maine) and then-Sen. Jeff Flake (R-Ariz.) were prevailed upon to toe the line in the end. When enough Republicans have crossed over to rebuke Trump, it has almost always been in symbolic ways: Jamal Khashoggi, Trump’s trade wars, the media not being “the enemy of the people,” and the withdrawals from Syria and Afghanistan.

This time, there’s meat on the bone. The GOP-controlled Senate would actually be taking concrete action to stop Trump, thereby forcing Trump to veto something. It would be his first veto, in fact. This registers that he is acting in clear opposition to — and overturning — the will of Congress.

Paul’s pledge to support the resolution doesn’t remove the pressure for Colorado Sen. Cory Gardner (Gardner spent his weekend dodging questions about whether or not he supports Trump’s pretend emergency). In fact, Paul’s clear position on the subject actually makes Gardner’s incessant waffling look even worse.

“Without question, the president’s order for more wall money contradicts the will of Congress and will, in all likelihood, be struck down by the Supreme Court.”

Gardner could have stuck to his talking points about the dangers of unchecked executive actions and avoided these persistent media questions. Gardner could then have cast a clean vote when the measure receives a Senate vote later this month.

Instead, Gardner is now stuck in a political corner of his own making. If he votes “YES” on the disapproval measure, then he will have spent weeks putting himself through the political ringer for no benefit. Of course, he can still vote “NO”, but if there are already enough votes in support, then what’s the point of that? If Gardner votes “NO” and Trump’s executive order gets overturned by the courts, he’ll be answering questions about his decision for years to come.

More often than not, sitting on the fence in politics just gets you a butt full of splinters.