Everybody And Their Mother Calls On Ralph Northam To Resign 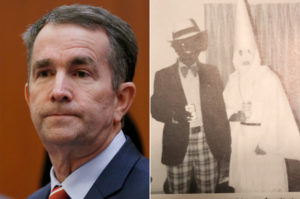 9NEWS’ Jacob Rodriguez reports the local side of a national story that only ends one way:

Despite holding a press conference denying that he was in a controversial photo from his 1984 yearbook showing someone in blackface and someone in KKK attire, Colorado Democrats Sen. Michael Bennet and former Gov. John Hickenlooper have called on Virginia Gov. Ralph Northam (D-Virginia) to step down…

“This photo may not be the sum of who Ralph Northam is,” Hickenlooper wrote Friday night after the story broke, “but there’s no doubt, that the right thing for him to do as a leader is step down.”

Bennet, serving in Congress since 2009, did not mince words – and even pointed to who he’d like to get a shot in the governor’s chair.

“The photo is racist and despicable,” Bennet wrote Saturday morning. “Governor Northam should step down and allow his Lieutenant Governor, Justin Fairfax, to become the next Governor of Virginia.”

Basically every Democrat in America has now called on Virginia Gov. Ralph Northam to step down from his position and make way for the popular Lt. Gov. Justin Fairfax, who happens to be African-American. Northam’s up-to-now failure to heed this overwhelming consensus is quickly making the transition from tragicomic to outrageous, and we’re hitting refresh in another browser tab as we write to make sure events don’t overtake our blog post.

And yes, lots of Republicans say Northam ought to resign as well.

Here’s to their newfound sense of decency.