Again, Who’s Afraid of the NRA? 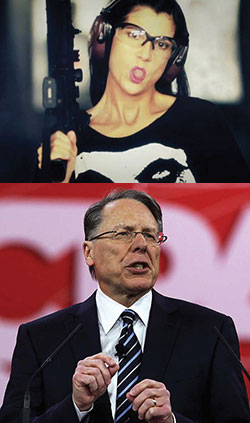 As Roll Call’s Kate Ackley reports, the National Rifle Association (NRA), the leading political advocacy group for gun owners that has morphed into a much broader “movement conservative” organization closely aligned with the Republican Party, seems to be losing its fabled edge in the era of Donald Trump:

The influence of the National Rifle Association, the nation’s highest-profile Second Amendment-rights organization and a longtime powerhouse against gun-control laws, is showing signs of potential decline.

The NRA’s own tax forms show a dip in revenue. And even as the group, now under the leadership of new president Oliver North of Iran-Contra fame, continues to spend big money on federal lobbying and political campaigns, its opponents in the gun-control movement, after decades of ever more deadly mass shootings and seemingly random incidents of gun violence, have been on the rise…

The NRA has found itself ensnared in controversy in recent months, some of it stemming from the special counsel probe into foreign interference in the 2016 elections. The group had ties to Maria Butina, a Russian who pleaded guilty late last year to charges of conspiracy to act as a foreign agent. Whether the gun group has allowed foreign money to infiltrate its campaign coffers also may be under investigation, according to news reports. And it’s on the hot seat for possible campaign finance violations of improperly coordinating its independent campaign expenditures with candidates, after a report by the liberal magazine Mother Jones.

The NRA faces a combination of circumstances that aggregate into a real threat, if not to the organization’s long-term existence which seems assured, than certainly the organization’s once (pardon us) bulletproof sway among virtually all Republican lawmakers and no small number of Democrats. President Barack Obama’s victory in 2008 provoked a massive buying spree of firearms by (needlessly) panicked gun owners, and gun manufacturers obligingly plowed those profits right back into the NRA’s advocacy budget. But with Trump as President, the hype that motivated the frenzied buying of guns under Obama just doesn’t exist.

At the same time, the continuing and worsening toll of mass shooting events in the United States has forced the debate over guns outside the NRA’s strictly-enforced boundaries. Here in Colorado, public reaction to gun safety laws that led to recall campaigns against Democrats in 2013 would look very different now, after so many intervening mass shootings with body counts that dwarf the 2012 Aurora theater massacre.

Still another factor negatively impacting the NRA’s political strength is a perception among hardened gun-rights advocates that the NRA has gotten “soft” on the issue–a view eagerly promoted by Colorado’s own Dudley Brown, who wields great influence within the gun enthusiast community through his local and national front groups. The NRA’s recent broadening into multi-issue conservative advocacy was meant to counter this ebb in support, but it also has had the effect of driving politically neutral or even left of center supporters away.

For all of these reasons, it’s not a surprise to us that the NRA’s political relevance is on the wane. If the present trend of radicalization among gun owners continues, along with a growing movement in the United States for gun safety laws considerably tighter than the status quo today, it’s a trend that could continue. For intelligent gun-rights supporters, giving the Dudley Browns of the world more power to disrupt Republican election strategy like they did in 2018 is a disastrous prospect–but that is the trajectory today.