Why Dudley Brown Is Working To Elect Tom Sullivan 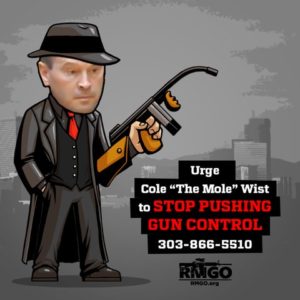 The Denver Post’s Anna Staver reports on a curiosity we’ve discussed in this space many times–the willingness of the hard-right gun rights organization Rocky Mountain Gun Owners to attack fellow Republicans who stray from their strident line. With the election approaching, RMGO is focusing its wrath on GOP Rep. Cole Wist of Centennial:

A conservative group that describes itself as “Colorado’s only no-compromise gun rights organization” is working to make sure a top Republican state representative loses his seat.

“We love election time,” Rocky Mountain Gun Owners posted on its Facebook page. “It’s when politicians are reminded that their votes have consequences.”

The group spent the weekend delivering flyers to voters in House District 37 that accused Rep. Cole Wist, R-Centennial, of “voting like a gun-grabbing Democrat” and urged people to vote against “Cole ‘The Mole’ Wist.”

The supreme irony of this situation is that Rep. Wist’s Democratic opponent is Tom Sullivan. Sullivan’s son died in the Aurora theater shooting in July of 2012, and since that time Sullivan has been one of the strongest citizen voices at the Capitol in favor of gun safety legislation. Sullivan’s fearless advocacy on the issue has frequently shamed Republican lawmakers into silence, and as a lawmaker it’s would be fair to conclude that Tom Sullivan would be RMGO’s worst nightmare.

Except Sullivan isn’t RMGO’s nightmare. For RMGO, it’s much worse that a Republican had the temerity to support a “red flag” bill this year to provide legal tools to temporarily remove firearms from the possession of mentally ill people in crisis. That’s all Rep. Wist did, and along with AG candidate George Brauchler it was enough to earn these Republicans a determined foe they do not need in this difficult election.

“Mainstream” Republicans have often expressed their frustration with RMGO’s red-on-red hostile engagement strategy over the years, but director Dudley Brown knows exactly what he is doing. From Brown’s point of view, ensuring that the Republican caucus is (pardon us) bulletproof in its opposition to even the smallest measure to reduce gun violence is more important than supporting Republican majorities in the short term.

And if guns are your single issue–no small segment of Republican voters–you’re with him.