Next Romney Family Thanksgiving Is Gonna Be Awkward 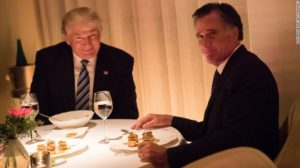 Republican National Committee Chairwoman Ronna McDaniel sided with President Donald Trump over her uncle Mitt Romney, slamming the Utah senator-elect for writing an op-ed in which he criticized the President.

“For an incoming Republican freshman senator to attack (Donald Trump) as their first act feeds into what the Democrats and media want and is disappointing and unproductive,” McDaniel wrote on Twitter Wednesday, choosing not to name her uncle. As of Wednesday morning, she had also “pinned” the tweet to the top of her profile.

In case you haven’t read Sen.-elect Mitt Romney’s op-ed dissing fellow gazillionaire and successfully-elected President (sorry but it’s true) Donald Trump just before clocking in for the next six years on behalf of our neighboring Beehive State, here’s the lede:

The Trump presidency made a deep descent in December. The departures of Defense Secretary Jim Mattis and White House Chief of Staff John F. Kelly, the appointment of senior persons of lesser experience, the abandonment of allies who fight beside us, and the president’s thoughtless claim that America has long been a “sucker” in world affairs all defined his presidency down.

It is well known that Donald Trump was not my choice for the Republican presidential nomination. After he became the nominee, I hoped his campaign would refrain from resentment and name-calling. It did not. When he won the election, I hoped he would rise to the occasion. His early appointments of Rex Tillerson, Jeff Sessions, Nikki Haley, Gary Cohn, H.R. McMaster, Kelly and Mattis were encouraging. But, on balance, his conduct over the past two years, particularly his actions last month, is evidence that the president has not risen to the mantle of the office.

Yeouch! Obviously the President was not pleased, and expressed his displeasure via the Twitters–while seemingly leaving the door open for Sen. Romney to come home:

Here we go with Mitt Romney, but so fast! Question will be, is he a Flake? I hope not. Would much prefer that Mitt focus on Border Security and so many other things where he can be helpful. I won big, and he didn’t. He should be happy for all Republicans. Be a TEAM player & WIN!

Criticism of Trump from fellow Republicans is a bellwether trend to watch as we move into the presidential election cycle. Don’t forget that Romney had his own period of awkwardly sucking up to Trump when he was looking for a Cabinet post, but today the contrast between Romney’s comparatively vocal criticism and Sen. Cory Gardner’s well-established image as a Trump toady is bigger than ever. Following Romney’s lead, as politically expedient as it would be for Gardner, is going to be a real stretch.

On the other hand, at least Gardner won’t get flamed by his own niece.