(Always with the “secession” talk — Promoted by Colorado Pols) 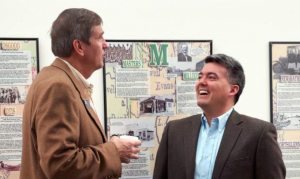 In response to Democratic gains in this month’s election, State Sen. John Cooke (R-Greeley) now thinks Weld County has “a lot more in common with Wyoming than Boulder” and therefore should cut ties with Colorado and “join Wyoming.” 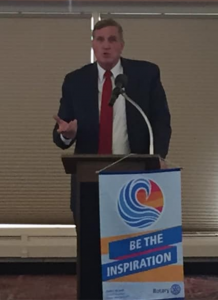 Sen. John Cooke talked secession at the Greeley Rotary last Thursday. It is unclear if the blue wave on the podium was intended to be ironic.

Republicans in northern Colorado first floated the idea of “seceding” from Colorado back in 2013, and Cook didn’t support it. But now he thinks Weld County should “join Wyoming,” as the Greeley Tribune reported Sunday:

In an appearance Thursday with Greeley Centennial Rotary, Sen. John Cooke, R-Greeley, said he didn’t support the secession movement when it happened, and now that the state is moving toward Democratic leadership at the top levels of the state government, he said Weld County would be better off joining its neighbor to the north.

“I’m thinking we oughta join Wyoming instead of seceding,” he said. “We have a lot more in common with Wyoming than Boulder. Gun control will be a big issue. They (Democrats) just can’t help themselves. They’ll ramrod a lot of bad policy through.”

Cooke is the most prominent Weld County Republican currently musing about abandoning Colorado, but he isn’t the only one. According to the Tribune, County Commissioner Sean Conway, who was a leader of 2013’s “51st State Movement,” received multiple calls asking about secession.

A call to secede also appeared on the comments section of the Weld County Republicans’ Facebook page. In part it read, “TIME TO END THE DENVER BOULDER FORT COLLINS TRIAD. TIME TO SECEDE! I have contacted the people behind the 2013 secession movement and we are ready to start again!”

While Weld County was the epicenter of the secession movement that culminated with an eleven-county referendum five years ago, voters rejected the notion despite Commissioner Conway’s enthusiasm. Of the eleven counties voting on the issue, only five approved the measure. The largest of those was Yuma County, home to U.S. Senator Cory Gardner (R-CO).

At the time, then-Congressman Gardner was in the early stages of his statewide campaign against incumbent Democratic Senator Mark Udall. Despite being a resident (and registered voter) of the county, he refused to say how he voted on secession ballot initiative.

Five years later, Gardner is again looking at a long and difficult statewide Senate campaign. Once again the candidate who likes to talk about his “Four Corners plan” definitely does not want to be talking about whether his hometown corner should tear itself away from the rest of our square state. If Sen. John Cooke continues to talk about secession publicly, he may find that Senator Gardner isn’t smiling quite as widely next time they meet.

This story first appeared on the Colorado Times Recorder.