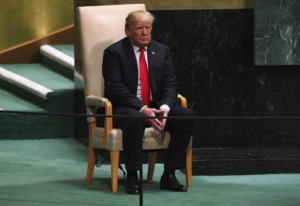 We wrote last week about a horribly-racist television advertisement being promoted by President Trump in an effort to scare voters toward Republicans in the midterm election. The TV spot in question was being aired across the country, but blowback has been significant enough that media outlets are finally pushing back.

Facebook and a growing number of media organizations — including Fox News — announced Monday that they would no longer provide a platform for a Trump campaign ad that echoes the president’s rhetoric on immigration ahead of the midterm elections.

After CNN called the ad “racist” over the weekend, NBC announced it was pulling the spot despite allowing it to air during a highly rated football game on Sunday night. Fox News and Facebook followed suit on Monday…

…“Upon further review, FOX News pulled the ad yesterday and it will not appear on either FOX News Channel or FOX Business Network,” Marianne Gambelli, president of ad sales, said in a statement.

“While the video is allowed to be posted on Facebook, it cannot receive paid distribution,” the social media company said.

President Trump was asked by a reporter today to comment on the advertisement in question. His response was about what you’d expect:

Trump is going to say whatever he wants, but when Fox News won’t even back you up…