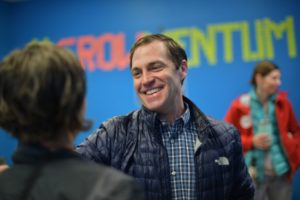 The Denver Post spent the weekend with a bunch of different 2018 candidates. The story gives us a little something to Crow about here at Colorado Pols (yeah, we went there):

Standing before a Post-it display that spelled “#CROWMENTUM,” Crow tried to balance confidence and caution. [Pols emphasis] The polls may be good, he said, but ballots are “still out there,” and Democrats learned a hard lesson in 2016.

And then he was off to launch another wave of volunteers into a grey, stormy morning.

We’re fairly certain that you can trace #Crowmentum back to this post on Colorado Pols. Certain enough, at least, that we’re going to take credit for it.