What you can do to fight back this week (October 8)

This past weekend was another terrible lesson that elections matter. 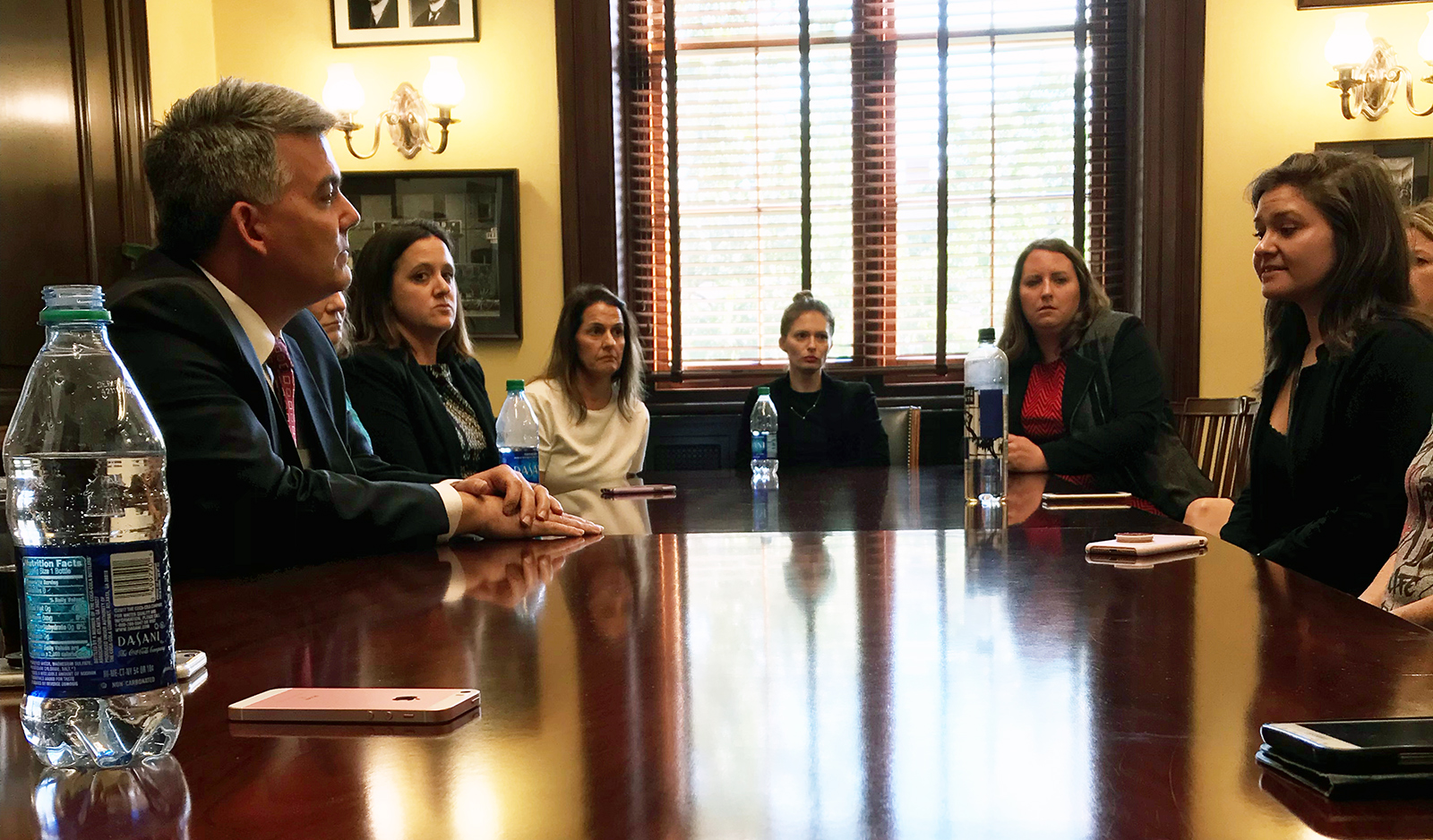 Last week, a group of women including survivors of sexual violence from Colorado confronted Sen. Cory Gardner about Brett Kavanaugh’s nomination to the U.S. Supreme Court. Gardner told these brave women he was undecided, but it was a lie. Just a day later he voted to advance Kavanaugh’s nomination.

That the Republican-controlled Senate was willing to ram through the appointment of Brett Kavanaugh to a lifetime seat on the U.S. Supreme Court after the credible allegations leveled against him is a betrayal of fundamental values held by millions of Americans. For generations, an unchecked dominant culture of sexual misconduct and violence against women has raged with little to no accountability. Since Donald Trump’s election despite a proven record of denigration and misconduct against women, we’ve seen an uprising against men at all levels of society who engage in this kind of deplorable behavior.

But it didn’t happen fast enough to stop Brett Kavanaugh. Because elections matter.

Now the questions raised by the confirmation of Kavanaugh, and indeed the election of Trump himself must be answered by the voters. The battle over Kavanaugh’s election takes place as voters are widely expected to hold Trump and his enabling party accountable in an historic wave election. As terrible as Kavanaugh’s confirmation may be, there is no possible better example of the stakes in the upcoming elections.

Accountability is coming. Ballots in Colorado go into the mail next week. In the meantime, don’t miss these great ways to take action for the week of October 8:

Come eat traditional foods that are cooked to nourish your soul. Bring a dish to share if you can, but if not, just bring your appetite! It’s always a good day to be indigenous!

Nathaniel Rateliff & The Night Sweats: Not One More

Nathaniel Rateliff & The Night Sweats, along with Rateliff’s foundation, The Marigold Project, are set for two days of events in Denver to support the prevention of gun violence in partnership with local and national nonprofit organizations. The non-partisan events will emphasize voter engagement, encouraging Colorado citizens to engage peacefully on the issue of gun violence while registering voters. On Saturday, October 13, The Marigold Project is hosting a selection of workshops, panels and training sessions at INDUSTRY. On Sunday, October 14, Nathaniel Rateliff & The Night Sweats host a rally and concert at Levitt Pavilion with special guests Fantastic Negrito, Los Mocochetes and the Denver Children’s Choir joining the band.

Please join us in Broomfield for Happy Hour (of Action)! We will be writing post cards for gun sense candidates. Have a drink, and help get out the vote!

Join us to hear from three people who have experienced the wounds of our divided religious and political time, and who work daily to re-connect, re-form, and work for healing. We will then take what we hear and practice a shorter version of the ‘People’s Supper’ to experience the small work of weaving ourselves back together.

Action Committee Banners Over I-25

The Action Committee’s “Banners Over the Highway/Take That Soon-to-Be Ex-Congressman Coffman” project continues every week! We’ll be on that bridge every Tuesday until Coffman loses his job. Join us and our CD6 team members. We’ve got enough banners for both sides of the highway now. We need more banner holders, flag wavers and middle finger counters!

Join us at the One Colorado office to call supporters of LGBTQ equality.

In Colorado, $750 million dollars are stolen from workers by way of paycheck. This economic reality is preventing many working families from fully advancing. Wages extracted from our communities leads to lower health rates, stagnates our local economies, and threatens democratic participation. In response to this economic injustice, Towards Justice has developed their Just Wages Navigator (JWN) program to help affected workers submit wage theft complaint forms to the Colorado Department of Labor and Employment’s Division of Labor Standards and Statistics.

WISE has recently hit a major milestone with the publication of WISE Up: Knowledge Ends Extremism, a 375-page report written in collaboration with 72 Muslim academics, scholars, imams, activists, and field specialists on issues related to American Muslim life, the differences between Islamic theology and extremist ideology, and best practices for preventing extremist recruitment and hate crimes against Muslims. WISE Up gives voice to the American Muslim community in its ongoing effort to set the record straight on Islam and Muslims, and to show that American Muslims are speaking out against all forms of hate, including terrorism and Islamophobia.

On Sept. 16 the Jordan Cove: Rocky Mountains to Pacific Coast project kicked off in the North Fork with a Rally for the Valley. Join us to get an update on what this project accomplished, who we visited with, and next steps in our joint struggle.

The HBO series “The Wire” has been called “the greatest television show ever made”. Over the course of five seasons it explored the inner workings of city life, including crime & punishment, politics, labor, education, and the media. Come watch an episode each week and converse with local leaders and media critics about how “The Wire” relates to what’s happening in our community today.

White Anti-Racist Allyship: Beyond the Basics

So, you are a white person who considers themselves an ally to black and brown folks. But what does that really mean, and how do you know you are an ally? Are you someone looking to deepen your understanding of oppression, privilege, and your role in combating racism as a white ally beyond your initial introduction into this subject? Then this training is for you. In this training, hosted by Regan Byrd, an anti-oppression consultant, we will educate you on the 4 I’s of oppression, an excellent framework for understanding oppression on a deeper level, white fragility, and the common pitfalls that stop many, if not most, white allies from being genuinely effective in their work combating oppression and being in true partnership with POC.

Navigating Conflicts Across Race and About Race — Free Workshop

Too often well-intentioned white people (friends and family, teachers/faculty, administrators, parents, activists, and community leaders) engage in conversations about and across racial identities in ways that perpetuate and model racist dynamics among their colleagues and those they serve. Whether through conscious and/or unconscious actions, many whites react in conflict situations with people of color in ways that undermine effective understanding, teamwork, and productivity. Participants will receive access to a packet of practical handouts and tools they can use in their ongoing interactions, as well as Kathy Obear’s book, But I’m Not Racist: Tools for Well-Meaning Whites.

Healthcare Issues in Communities of Color

Warm Cookies of the Revolution: The Impossible Task: Extinction

We’ll have loads of hands-on fun to start off the evening with our friends from the Denver Zoo and the Botanic Gardens. We’ll also have some examples of de-extinction (yes, bringing back the Woolly Mammoth) with Denver Biolabs, pretty damn near extinct video games to play from the Fiftytwo80s, some photogram activities, and then the expertise of some really incredible people in our community.

We’re saving America one postcard as a time. Who wants to help?

On October 13th CIRC members and volunteers will converge upon Colorado Springs to collect pledge cards in support of Virginia’s Law and identify voters that support our issues. Following the elections, we will engage these voters to activate them to support the fight to pass our policy priorities. We will need to show our power in a deep way in order to move our laws forward and our work starts next weekend!

Join CBWPA for its 40th Annual Tribute to Black Women. We will honor women who have had an impact on our community and celebrate 40 years of service.

Where: Renaissance Denver Stapleton Hotel, 3801 Quebec St, Denver
When: Saturday, October 13 at 11:00am

We will meet to march toward Riverwalk to emphasize the importance of electing GunSense Candidates in November.

Come have a brew and help us raise money for the JCEA Excellence fund, a scholarship for Jeffco graduates majoring in education. $1 from every pint sold from noon – 4 will benefit the Excellence Fund.

As part of the Global Frackdown we are rallying to protect Colorado from the Dangers of fracking. The rally will support the Martinez Case and Prop 112 for 2500 ft oil and gas setbacks.

The Tiger Hunter is an immigrant story about chasing the American Dream with both humor and heart. Bridging Cultures is an event series by Stephanie Tanny and other community leaders aimed at creating spaces for people to connect with diverse communities outside of their own. This time around, we are bringing you a film screening of “The Tiger Hunter” followed by a panel discussion with community members from Colorado’s South Asian community.

Motus Theater, in collaboration with American Friends Service Committee (AFSC), Faith in Action (PICO) and more….are presenting Women of Resolution, a performance where members of the Colorado State Legislature read the stories of women in Sanctuary in Colorado. The reading will be followed by a poetic response from national slam poet winner Dominique Christina and an interfaith panel of Sanctuary Movement leaders including Jeanette Vizguerra. Live event at eTown. Livestreaming event (FREE) at UU Church of Boulder.

Thanks again for all your hard work these last two years to fight back against Trump and the far right. Please watch your inbox for breaking news and alerts, and we’ll see you next Monday with many more ways to make a difference.