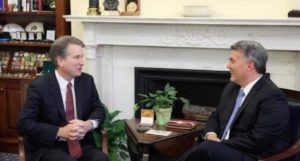 President Trump may have pulled a muscle this week from patting himself on the back so hard over his out-of-character silence about Christine Blasey Ford, the California professor who has accused Supreme Court nominee Brett Kavanaugh of sexual assault when they were both in high school. On Friday, Trump predictably abandoned that approach and went on the attack.

President Donald Trump and the GOP are hitting the panic button.

After a week of holding back, Trump on Twitter disputed the credibility of Christine Blasey Ford’s sexual assault allegation against Brett Kavanaugh on Friday. It’s a setback for Republicans who had welcomed Trump’s self restraint about a scandal that threatens to bring down his Supreme Court nominee.

Trump’s speculation about why Ford didn’t report her alleged high-school-era assault if it “was as bad as she says” comes just hours after a close Kavanaugh ally sought to implicate another classmate of the nominee and Ford in the attack on her — a Kavanaugh exoneration theory hotly anticipated by the GOP that landed with a deafening thud.

The one-two punch of Trump and prominent conservative lawyer Ed Whelan’s unsuccessful attempts to undercut Ford and boost Kavanaugh leaves the GOP effort to confirm the 53-year-old appeals court judge in fresh peril. It caps a week of roller-coaster talks over whether his 51-year-old accuser, a California-based professor, will testify publicly. Senate Judiciary Chairman Chuck Grassley’s (R-Iowa) staff is in talks with Ford’s attorneys about a hearing sometime next week, but it’s not clear whether the GOP is ready to meet the conditions requested by her camp during a Thursday night call. 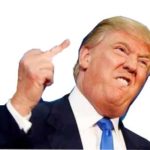 Senate Majority Leader Mitch McConnell predicted today that Kavanaugh would be confirmed to the Supreme Court in the near future. This may be mostly bluster, or it may very well be that Senate Republicans are willing to risk their majority in order to confirm Kavanaugh before the midterm election. As we’ve discussed before, the optics of a Senate Judiciary Committee full of old white dudes peering down at Kavanaugh’s accuser could be pretty harmful as a pre-election image for undecided voters.

Trump’s Tweetstorm and the bizarre smearing of Ford by conservative legal operative Ed Wheelan on Thursday — followed by Wheelan’s apology this morning — indicates that Republicans still have no idea how to react to the accusations against Kavanaugh. Meanwhile, Ford’s attorneys continue to negotiate with Senate leaders about the terms of her upcoming testimony about Kavanaugh.

If there is a scenario whereby this ends well for Republicans…well, let’s just say we’ll let you know when we find it.