Get More Smarter on Friday (September 14)

This will all be over in 53 days…and then we can start talking about 2020. It’s time to Get More Smarter. If you think we missed something important, please include the link in the comments below (here’s a good example). If you are more of a visual learner, check out The Get More Smarter Show.

Paul Manafort, former campaign manager for Donald Trump, will apparently cooperate with special counsel Robert Mueller despite Manafort’s prior insistence that he wasn’t going to make a deal. From the Washington Post:

The decision by Manafort to provide evidence in exchange for leniency on sentencing is a stunning development in the long-running probe into whether any Trump associates may have conspired with Russia to influence the 2016 election.

Manafort’s defenders have long insisted that he would not cooperate with Mueller, and didn’t know any incriminating information against the president.

Prosecutor Andrew Weissmann said at the beginning of Friday’s plea hearing that Manafort has agreed to cooperate with investigators.

Manafort’s second trial was scheduled to begin next week. Instead, Manafort will plead guilty on two charges: Conspiring to defraud the United States and conspiring to obstruct justice.

As Philip Bump notes in a separate story for the Washington Post, Manafort is now the fifth member of Trump’s 2016 campaign team to plead guilty to criminal charges.

► President Trump was widely criticized on Thursday for claiming that a reported death toll in Puerto Rico following last year’s hurricane is some sort of conspiracy by Democrats to make him look bad. In response, Democrats pointed to actual facts showing that they didn’t need to dream up any numbers in order to make Trump look terrible.

In one email, dated Sept. 29, 2017, a first responder — whose name has been redacted — describes “finding mass graves in mud slide areas,” and requests counseling support for federal first responders in the area. An unnamed Army National Guard general is included in the correspondence.

Only 16 deaths were publicly acknowledged when President Donald Trump arrived at the island days later to survey damage and meet with local officials. That number climbed to 34 hours after he left.

Trump, of course, has regularly crowed that his administration’s response to Hurricane Maria was a YUGE success. This is probably not particularly reassuring for people on the East Coast currently dealing with Hurricane Florence.

► Supreme Court nominee Brett Kavanaugh is denying sexual assault charges from when he was in high school, as NBC News reports:

Supreme Court nominee Brett Kavanaugh on Friday denied allegations made by a woman who reportedly said that he had held her down at a party when they were in high school in the 1980s and tried to force himself on her.

According to a report Friday in The New Yorker by Ronan Farrow and Jane Mayer, the woman, who has asked not to be identified, described the incident in a letter that was sent to the offices of two California Democrats, Sen. Dianne Feinstein and Rep. Anna Eshoo.

The woman claimed that Kavanaugh and one of his classmates had been drinking and turned up the music in the room they were in to drown out the sound of the woman’s protests and that Kavanaugh covered her mouth with his hand, the report said.

Feinstein said on Thursday that she had referred the matter the the FBI.

► As the Colorado Independent reports, farmers in Colorado are concerned about efforts in Congress to significantly limit SNAP benefits (the Supplemental Nutrition Assistance Program formerly known as “food stamps.”) For obvious reasons, any reduction in SNAP benefits would hurt the bottom line of farmers.

► Signs of a failing campaign: You go to Sterling, Colorado for a meet-and-greet, and only two people show up. Thus is life for Republican gubernatorial candidate Walker Stapleton.

► Congressman Mike Coffman (R-Aurora) was never behind in any public poll while defending his seat…until 2018. A poll by the New York Times, made available in real time, shows Democrat Jason Crow with a significant lead over Coffman. This is the second public poll this year to show Crow leading Coffman in CO-6.

► Congressional Republicans are essentially daring President Trump to shut down the federal government ahead of the mid term elections. From Politico:

Capitol Hill leaders on Thursday announced a mammoth fiscal 2019 spending deal that achieves one of the Trump administration’s top priorities — the Pentagon’s first on-time spending bill since 2008. But there’s a catch. The same package also funds some of the government’s most sprawling agencies at levels that are billions of dollars more than Trump requested. And if Trump refuses to sign it, much of the government, including parts of the Pentagon, would shutter.

“You effectively shut down the whole government,” Rep. Tom Cole (R-Okla.), a senior appropriator, said of the funding deal he helped shape.

Spending leaders from both parties detailed the strategy for the first time Thursday, just 17 days before government spending runs out. The Senate is expected to easily approve the package next week.

If this spending bill is approved, it would keep the government running for almost three whole months! In this scenario, the next funding deadline would be December 7.

► There is yet more evidence that President Trump’s trade war is causing serious economic damage in the United States.

► As Judith Kohler reports for the Denver Post, efforts to get full funding for the Land and Water Conservation Fund (LWCF) are moving forward:

A congressional committee approved a bill Thursday that would permanently reauthorize the Land and Water Conservation Fund, a program Colorado outdoor businesses and conservation groups say is crucial to the state’s outdoor heritage.

The U.S. House Committee on Natural Resources voted for a compromise that would renew the fund, which is set to expire Sept. 30. The Land and Water Conservation Fund, established by Congress in 1964, has funded trails, city parks, fish and wildlife habitat restoration and other projects nationwide.

In Colorado, LWCF has generated more than $268 million for conservation and outdoor recreation projects since it began. The money has been used to acquire land or easements to conserve important fisheries and improve access to public lands, said Tim Brass, the Colorado state policy director for the sportsmen’s group Backcountry Hunters and Anglers.

► The Every Kid Outdoors Act made it over another hurdle in Congress. The bill would create a program to give fourth graders and their supervisors free entry to national parks and recreation areas.

► Westword ponders the question of whether or not President Trump will come to Colorado to campaign for Republican gubernatorial candidate Walker Stapleton.

► This yard sign for no-hope Republican candidate Mark Barrington in CD-7 is quite terrifying: 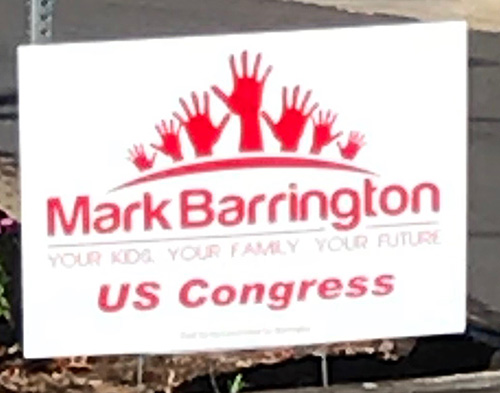 ► Actress Cynthia Nixon was thoroughly crushed by incumbent Gov. Andrew Cuomo in Thursday’s Democratic Primary in New York. Cuomo should cruise to a third term as Governor after beating Nixon by 30 points.