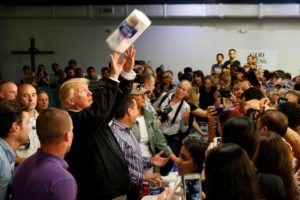 As the East Coast prepares to face the wrath of Hurricane Florence — predicted to be one of the most powerful storms to hit the United States in decades — President Trump decided it would be a good idea to publicly dispute reports that thousands of Puerto Ricans died as a result of Hurricane Maria in 2017.

As the Washington Post reports, Trump is getting pummeled for these ridiculous comments:

President Trump drew widespread rebukes Thursday — including from several fellow Republicans — after falsely claiming that the number of deaths attributable to Hurricane Maria had been inflated by Democrats to “make me look as bad as possible.”

In morning tweets, Trump took issue with the findings of a sweeping report released last month by George Washington University that estimated there were 2,975 “excess deaths” in the six months after the storm made landfall in Puerto Rico in September 2017.

Trump said on Twitter that “they had anywhere from 6 to 18 deaths” when he visited the island about two weeks after the storm.

“As time went by it did not go up by much,” Trump wrote. “Then, a long time later, they started to report really large numbers, like 3000. … This was done by the Democrats in order to make me look as bad as possible when I was successfully raising Billions of Dollars to help rebuild Puerto Rico. If a person died for any reason, like old age, just add them onto the list. Bad politics. I love Puerto Rico!” [Pols emphasis]

“What kind of mind twists that statistic into ‘Oh, fake news is trying to hurt my image.’ How can you be so self-centered and try to distort the truth so much? It’s mind boggling.”

As Chris Cillizza writes for CNN, Thursday’s Tweetstorm from Trump proves, once again, that the Big Orange Guy can always stoop lower:

…Earlier this week, faced with the reports of the greatly expanded death toll, Trump insisted that he had done a terrific job in the country. “I actually think it was one of the best jobs that’s ever been with respect to what this is all about,” he told reporters.

That was bad enough, particularly given the fact that a) we are talking about peoples’ lives here and b) another major hurricane was barreling toward the Carolinas even as Trump was touting his own performance after Hurricane Maria.

Now Trump has gone even further — pivoting from merely defending his performance to embracing a conspiracy theory about the actual death toll from the hurricane and suggesting Democrats are secretly behind all of it. As evidence, he offers — you guessed it! — absolutely nothing.

Trump’s ridiculous conspiracy theory isn’t just a political problem for the White House — it’s a serious albatross for Republicans in Colorado and across the country who have been embracing Trump ahead of the 2018 midterm election.