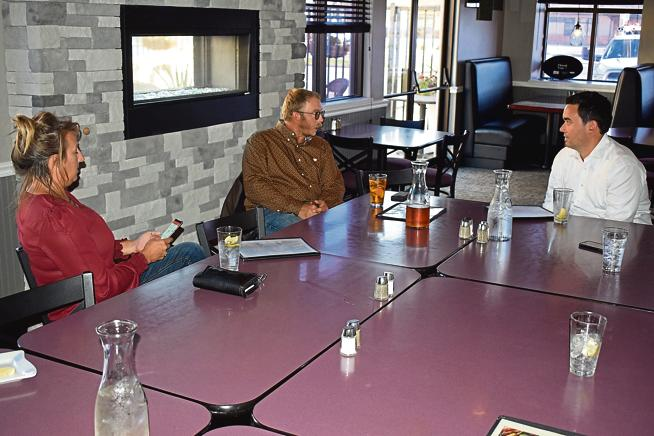 The Democratic Governor’s Association (DGA) cracks on the above photo from the Sterling Journal-Advocate, featuring GOP gubernatorial candidate Walker Stapleton and a precious two attendees at Stapleton’s campaign stop in the northeastern Colorado town Monday:

Walker Stapleton’s enthusiasm gap can be summed up in one photo. When he visited Sterling, Colorado, on Monday, he drew in a whopping two people—an elected Republican official and a Republican candidate—to hear his ideas for Colorado.

Despite not doing his job and missing from work for weeks at a time while campaigning with fringe right-wing figures like Tom Tancredo, Stapleton isn’t getting his voters all that excited. Likely because his real base consists of his special interest donors.

For the record, that’s Jane Bauder, a candidate for Logan County commish and Josh Sonnenberg, chair of the local Republican Party. As for why nobody else showed, reports the J-A?

A planned northeast Colorado business roundtable at The Grill @ River City was short on attendees; according to Josh Sonnenberg, president of the Logan County Republican Party, several businesses in Sterling were affected by loss of Internet service Monday and that likely prevented business people from being able to break away.

We’ve been to Sterling, and “the internet was down” doesn’t seem like a very good excuse for why nobody showed up to Stapleton’s campaign event there. Logan County is about is safely Republican as it gets, and sugar beet harvest season isn’t until October.

So in the absence of a better explanation, we’re forced to agree that Stapleton just isn’t a draw.

And, well, yes, Tom Tancredo probably would be.