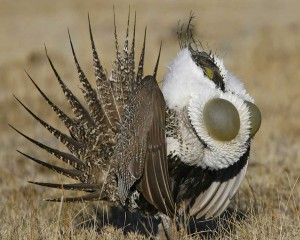 Sage Grouse of the Greater kind.

Top Colorado Democrats on Tuesday accused the Trump administration of rushing to open public lands to oil and gas drilling without giving the public nearly enough time to comment.

In letters to the U.S. Bureau of Land Management, Sen. Michael Bennet and Gov. John Hickenlooper also asked the government not to go ahead with plans for oil and gas drilling on habitat for the greater sage grouse, a bird that Western states and federal agencies are trying to protect…

A joint federal-state program called the Sage Grouse Initiative, launched under the Obama administration, is trying to save the bird without resorting to the strict restrictions of the Endangered Species Act.

It’s ironic that, in barreling ahead with drilling in areas inhabited by the greater sage grouse, the Trump administration could thwart a somewhat controversial effort to protect the species without invoking the Endangered Species Act–by reducing the population enough to trigger the Act unequivocally! In the long run, it would be better for energy producers to cooperate with the current plan, demonstrate its success, and avoid much more stringent long-term oversight.

Unfortunately for the sage grouse, Donald Trump’s regulatory free-for-all isn’t going to last forever. And given the choice between short-term profit and long-term sustainability, energy companies will do what they will always do given the opportunity, undoing the best-laid plans of their apologists on both sides of the aisle.

The real moral of the story? Elections matter.

Sorry, that’s the answer for a lot of things right now.